Using on-market data from their software – which considers the combined activity of listings on Rightmove and Zoopla – BriefYourMarket.com has published an update of the troughs and peaks of market activity during the pandemic.

After bottoming out with a mere 47 new listings coming to market from the 1st to the 17th of April [the exceptionally low volume does not show up on the graph], there have been surges of activity, starting with:

These figures could indicate positive signs of coming market recovery for agents. 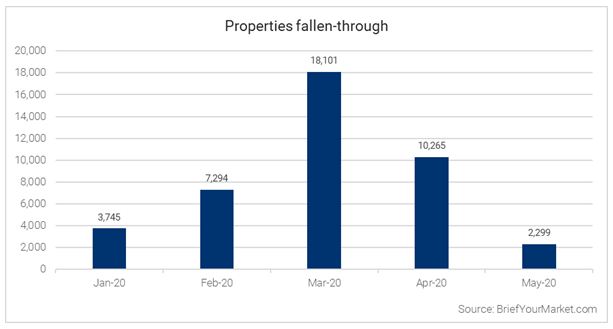 March shows the greatest contrast between pre and post-pandemic rates for fallen-through sales, peaking on the 26th March at 3,661 in a day.

This decline corresponds with a reduction in new listings (173,926 compared to 13,825, respectively).

Apart from one anomaly, on the 25th April, activity has started normalising for fallen-through sales.

This can also be seen with withdrawn properties.

With fewer properties on the market to begin with, only 48,623 were withdrawn in April compared to previous months, where that figure was – on average – 91% higher.

Being midway through May, it is too soon to comment on activity for this month.

According to a sentiment poll – taken from a sample of BriefYourMarket.com’s Protection & Planning webinar series, with 3,000 participants – 63% of agents have secured new lettings business from landlords since lockdown started.

Respondents were also asked whether they could see virtual services forming part of the ‘new norm’ within property: 65% answered yes, 23% weren’t sure and 12% voted no.

When combined with data analysis for new listings, the overall conclusion is optimistic for agents.

To register for upcoming sessions of BriefYourMarket.com’s Protection & Planning webinar series – in association with Yomdel –  and to access a library of recorded episodes, click here.

The heavy impact of Covid-19 on fall-throughs and withdrawals