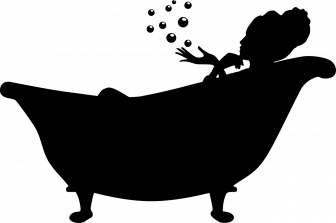 Here at EYE we do try to suppress as much as is possible of  the ‘commercial’ element of  the material submitted to us by hopeful PRs in search of coverage for their clients.

But this one on behalf of Total Landlord deserves to be shown in its entirety not least for the fact that someone spent substantial seconds seeking suitable-sounding story-supporting sentences for headlines. Well, it is Silly Season after all.

They win the Alliteration Prize of the Week which awards them nothing other than several loud groans.

The baffling business of the bath and battering ram

It was the middle of the night when a couple were startled by the sound of their next-door neighbour crying out for help. Fearing for her life and unable to gain access to the property, they called the police who took the decision to break down the door with a battering ram to answer the tenant’s panicked cries as quickly as possible.

Once inside, they were stunned to find the tenant unharmed but somehow wedged in the bathtub. Stuck and unable to free her without causing further distress, the fire service had to be called in order to use their skills to free the woman from her tub. Luckily, she suffered no serious injuries.

Outcome: Total Landlord Insurance accepted the landlord’s claim totaling £1,200 to have the door replaced due to ‘threat to life’ of the tenant.

The extraordinary episode of the engineer and the explosion

Shortly after a fully qualified engineer made alterations to a range stove and heating system in a rental property, it exploded! A forensic examination revealed that the engineer had mistakenly capped off the back boiler which then created an unvented stream pressure vessel to rupture and explode.

Outcome: As a result, the stove and heating system had to be fully replaced. The walls also needed re-plastering and redecorating, and due to a lack of central heating, the unlucky tenants had to move out of the property. Luckily for the landlord, their Insurance included the unlikely event of explosion as well as loss of rent, and a claim totaling £30,579 was processed.

The belated broadcast of the bomb that went boom

In 2021, residents in Surrey were shocked to hear an extraordinarily loud bang which turned out to be the controlled detonation of an unexploded WW2 bomb found nearby.

Despite protective processes being put in place to minimise the impact of the blast, some collateral damage was caused including one property that suffered severe cracking of the brickwork along with windows and doors being completely blown out. It was quite a shock for the tenants living inside.

Outcome: Thankfully, no one was hurt by the explosion but the damage was so bad that the tenants had to move out. The landlord claimed for £204,000 to repair the damage and pay for loss of rent and the claim was promptly settled.

The flat, the footie and the follicle flood farce

In the summer of 2021, a tenant was washing items in the bathroom sink of her home in north London. As she was doing so, she was distracted by exciting events in the Euro’s football game playing on the television in her living room. Rushing to catch the drama, she left the taps running in the bathroom and didn’t discover her error for over two hours, by which point water had poured onto the bathroom floor and gushed into the flat below.

Outcome: A claim of £10,870 was made by the landlord and quickly settled. The money was required to replace the bathroom floor and repair all damages to the flat below.

The fortuitous failure of the front door fire bug

Late one evening, tenants were alerted by a passer-by that someone had posted something suspicious through their letterbox before running away. It turns out the item was on fire! The heinous act of arson caused a fire inside the property, badly damaging the front door. The fire brigade were promptly called and dealt with the fire, ensuring it didn’t spread through the property.

Outcome: Nobody suffered any physical injuries, but the damage to the front door meant it needed replacing. A £2,500 claim was submitted by the landlord and settled by Total Landlord Insurance.

The turbulent tale of the Thames tornado

In June 2021, a mini-tornado crashed through north east London. Footage was shared on social media showing scenes like those from The Wizard of Oz: wheelie bins swept into the air, trees ripped from their roots and walls tumbling down. One street in particular experienced significant damage to vehicles, buildings and power lines, with one house suffering roof damage and dislodged tiles.

Outcome: Luckily, the landlord had cover that included storm damage and their claim for £1,235 to repair the roof was settled faster than you could click your heels thrice.

“Sometimes, real life is stranger than fiction and as landlord insurance providers we hear some quite remarkable stories. But just because a story is unusual, it doesn’t mean the damage caused is any less serious and disruptive.

“That’s why having insurance is so important – you never quite know what’s going to happen and failing to secure the correct cover can leave you severely out of pocket. Trust us, we’ve seen it all.”