Agents have been warned that when showing fees in their adverts, they must show them as inclusive of VAT.

Agents must not show fees as being a sum or a percentage plus VAT.

Both Ombudsman Services and the Property Ombudsman sent a note out to all their members following new advice issued last Thursday by the Committee of Advertising Practice.

That in turn followed a ruling last November by the Advertising Standards Authority where an agent in Derby, IMS Residential, advertised their selling fee as 0.9% plus VAT.

The ASA said that the agent should have used a figure of 1.08%.

The new advice from the Committee of Advertising Practice says that percentage fees should be adjusted to include VAT.

So, for example, a percentage sales fee of 2.5% plus VAT should be advertised as 3%. It is, however, permissible to add that the fee is inclusive of VAT.

Flat rate fees should also be adjusted to include VAT. For instance, a sales fee of £495 plus VAT should appear as £594.

The ruling applies to all agents’ adverts including in mailings, text messages, own websites and social media.

It would appear that some agents including Purplebricks – which at the weekend was showing on its site as costing sellers £665 plus VAT, as below – will have to amend their adverts.

However, while letting agents are obliged to show fees along with rents, there is no legal obligation on sales agents to show their fees.

The CAO ruling therefore only applies to sales agents who advertise their fees.

To double-check that Eye’s interpretation was correct, we asked ombudsman Christopher Hamer, who confirmed that it is correct.

He said: “An ASA ruling in 2013 requires agents to display all non optional fees charged to tenants to be displayed along with the rental figure. The Consumer Rights Act just passed extend that so that agents must show their fees prominently in their offices and on their websites. It does not apply to sales agents.

“The latest CAP ruling applies when an agent is advertising their services. The TPO Code still applies in regard to how fees are shown in agency agreements.”

The CAP ruling is here 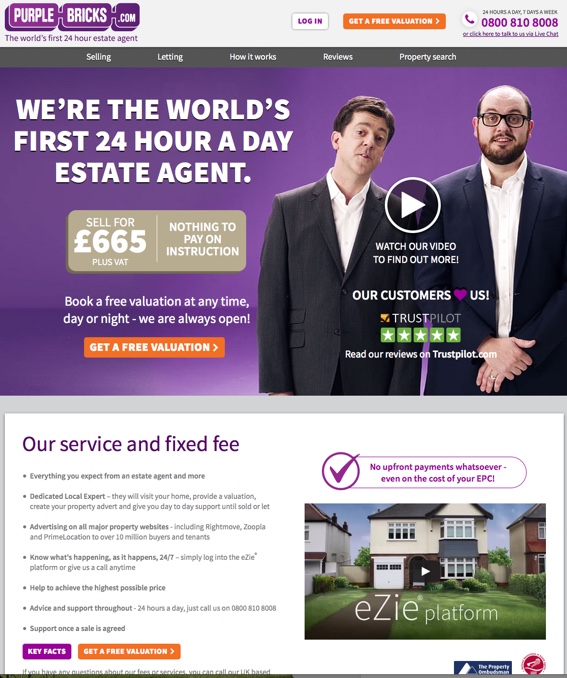