Industry heroes were celebrated at the second Agents Giving ball on Friday night – while Agents Giving itself announced that, as the industry’s charity, it is on course to raise over £1m this year.

Agents Giving raises funds which ‘top up’ the fund-raising efforts of agents and industry suppliers.

This year’s charity champions were honoured for the work they had done for their own favourite causes.

In the individual category, Luke Jones, of Fresh Start Properties, Bridgend, triumphed after running from Holyhead to Cardiff in five days – the equivalent of five marathons. He was raising funds for Tree of Hope, which helps families of sick children.

In the innovation category, Premier Lettings of Bath scooped the award after giving £1 each to a group of schoolchildren, for them to turn into more money for charity. After three months, that £1 had grown to £17 per child.

In the company supplier category, software supplier VTUK was the winner, marking the way the entire staff have supported with their tremendous fund-raising efforts their chief executive Peter Grant and his wife Claire, who has triple negative breast cancer.

A final prize was awarded to Avery Estate Agents in Weston-super-Mare, Somerset, which has raised money to buy life-saving baby incubators.

Rightmove was also thanked for its £100,000 Agents Giving fund which is used to help individual fund-raising efforts get under way by, for example, buying equipment.

Undoubted highlight of the evening, however, which also featured entertainment and a silent auction, was a chance to have lunch with the uniquely shy and retiring Simon Whale.

We do not know what Whaley – who manages to combine a demanding role at software firm Reapit with the richly deserved title of legend in his own lunchtime – will wear for the occasion, but no doubt he will look as inconspicuous as ever.

At the Agents Giving bash, he did not disappoint in a red suit covered in white hearts, below.

His lunch at the Fat Duck was auctioned off by Peter Knight, who achieved not one but three winning bids of £1,200 each.

The winners were Simon Woodcock, Mark Manning and Miles Shipside.

It was a fabulous evening all round – and many congratulations go to Peter Knight and his team at Agents Giving, with special thanks to the charity’s sponsors, Reapit, Ravensworth, Cabin Fever, Local World and Brief Your Market. 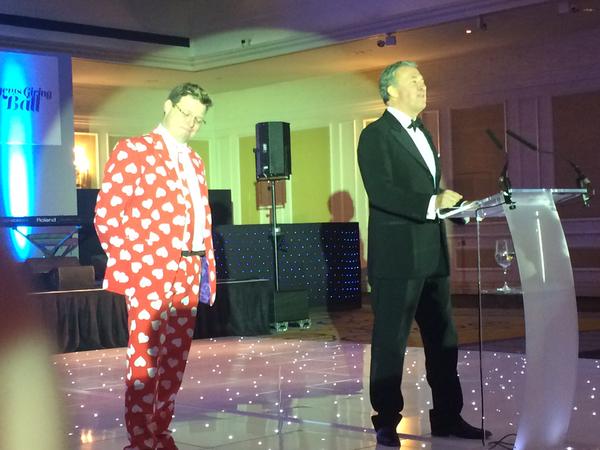