Estate agents have helped fight back against cancer by raising £16,300 in the 2018 Rumble with the Agents charity event.

The night saw ten property professionals, with little or no previous boxing experience, from companies such as Oscar Knight, Area Square, Happy Tenant Company and the Property Redress Scheme, enter the world of white-collar boxing to raise money for charity.

The event was first launched in 2015 and has raised almost £75,000 for local charities selected by Landlord Action founder Paul Shamplina.

He said: “I appreciate that the concept of property and boxing do not appear as a natural fit for one another, but knowing what a competitive bunch property professionals are, I thought it would be a great opportunity to encourage some of those I have worked with over the years to join me in raising money for charity.”

As well as the boxing, guests enjoyed a three-course meal followed by a raffle and charity auction, with signed sporting memorabilia including a signed Muhammad Ali framed picture, Tottenham Hotspur football shirt, an Anthony Joshua glove and a framed photo of Ed Sheeran.

Eddie Hooker, chief executive of Hamilton Fraser, the main sponsor of Rumble with the Agents, added: “We have been sponsoring this event since it started and it just keeps going from strength to strength. It is so important to support your local charities and it’s amazing that almost £75,000 has been raised so far for these much-needed causes.”

Meanwhile, Shamplina is continuing his support of Cherry Lodge Cancer Care by putting himself in the ring on June 22 at York Hall in Bethnal Green, London.

You can sponsor him at: https://www.justgiving.com/fundraising/paul-summer-of-glove 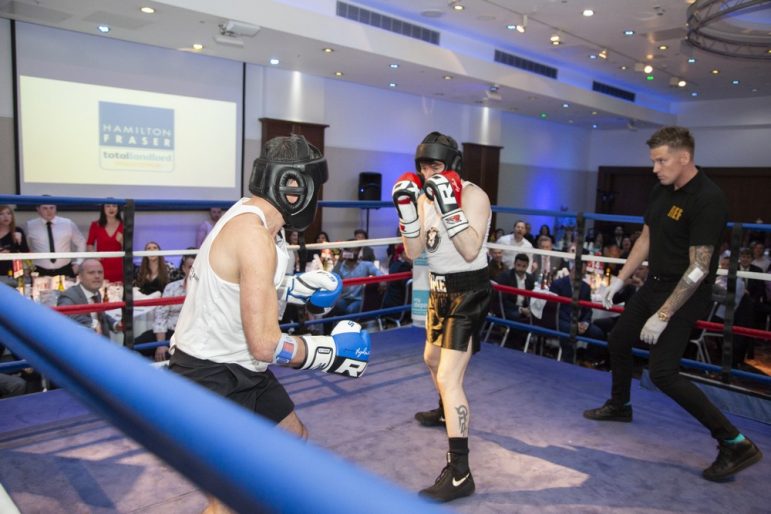