One of the biggest hitters at Countrywide is leaving after only a year in her role.

Helen Normoyle, chief marketing officer and a member of Countrywide’s executive team, is a former director at the BBC. She is quitting Countrywide to take up a position at Boots. She leaves at the end of this month.

It is not known when she resigned from Countrywide.

However, yesterday a source claimed that she had been appointed to Countrywide in mid-2015 but could not join until the following March, because she had had to work out her contract in her previous role.

Normoyle joined Countrywide in March last year, amid fanfare and with a hugely impressive CV. She was director of marketing and audiences at the BBC, while her other roles have included being director of market research at Ofcom, plus a variety of posts at Motorola.

Immediately prior to joining Countrywide, she was chief marketing officer at DFS.

The latest departure follows rumours of a number of departures in November, including that of the managing director of Hamptons who had been in his post for a matter of just months. Countrywide has re-organised its London operation, which now comes under the ‘retail’ business led by Sam Tyrer. London’s seven Faron Sutari branches have now disappeared to become part of John D Wood.

A spokesperson for Countrywide yesterday confirmed Normoyle’s departure: “We can confirm that Helen Normoyle will be leaving Countrywide at the end of February, to join Boots UK & Republic of Ireland as marketing director.

“During her time with us Helen has made a significant impact, creating a strong integrated marketing department which leaves us in good stead going forward. We wish Helen all the best and thank her for her valuable contribution to Countrywide.”

Alison Platt, CEO of Countrywide, also paid tribute to Normoyle in an email to Countrywide’s ‘Leadership Community’, asking recipients to cascade to their teams as appropriate: see below. 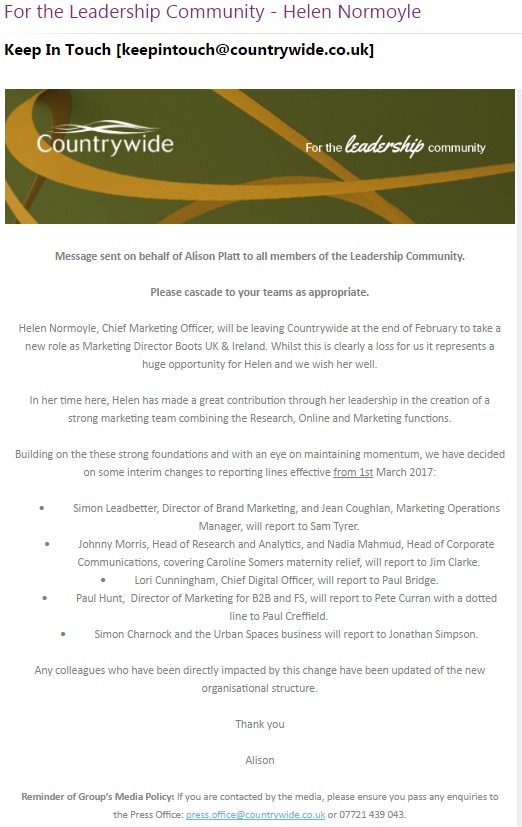