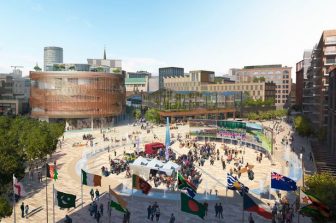 The council had planned to form the development joint venture with Lendlease last year, with a view to starting the project in 2022, but was delayed.

The decision is a major milestone for a scheme, which is one of the most significant development opportunities in the city and a key strand of plans to transform the city centre.

The creation of a new urban quarter on a 17-hectare site at Smithfield will include a new home for Birmingham’s historic Bull Ring Markets, leisure and cultural facilities, more than 2,000 homes around a new public square, along with a public park and community facilities.

The redevelopment of the area, which is twice the size of Brindleyplace, is expected to take 15 years to complete

Cllr Ian Ward, leader of Birmingham City Council, said: “Birmingham Smithfield is a real once in a lifetime opportunity to create a new community in the heart of our city – and we are really excited to be working with Lendlease Europe, who have an international proven track record for bringing forward major developments like this.

“Entering into this agreement with Lendlease Europe is not just about bricks and mortar; they have committed to invest in the local community and this development will create thousands of jobs which will benefit our citizens.

“This £1.9bn development will be a major boost for the city as a whole: Birmingham Smithfield will become a shining example of inclusive economic growth and will create a real legacy in the heart of Birmingham.”

Once a contract has been finalised and approved by both parties then work on the planning application for the scheme will be able to begin, and a full public consultation held to enable local people to have their say as more detailed plans are developed.

Bek Seeley, Lendlease’s managing director for development in Europe, commented: “This is an important step forwards for a project that will provide remarkable opportunities for future generations of residents and businesses in Birmingham.

“A great deal of work has already been carried out to get the project to this stage and we’re looking forward to being able to share ideas and collaborate with the wider community next year to bring to life this fantastic centre piece for Birmingham’s future.”