Just over two years ago, in the summer of 2019, annual house price growth was running at 1.3%, the lowest rate of growth since 2013, when the market (and the economy) was still recovering from the global financial crisis.

This low rate of price growth was caused by uncertainty around Brexit, which acted as a brake activity and on prices.

The July election in 2019 was a turning point – a new leader with a sizeable majority meant certainty for markets, and this was immediately reflected in the housing market, with price growth rising above 2% by the end of the year, the first time it had reached this level in 12 months.

Several months later – the pandemic emerged and the first lockdown was announced. There were fears that the nascent housing market activity would be curbed again as a result. Instead we have seen one of the busiest 18 month periods in the housing market in more than a decade.

The mix of the pandemic-led ‘reassessment of home’ – with households deciding they want to live in a different space or location, coupled with the tax break of the stamp duty holiday, is set to have resulted in around one in 16 homes changing hands this year. The demand in the market has caused a tightening of stock levels, and also put upward pressure on pricing – with the annual rate of house price growth now at 6.9%. 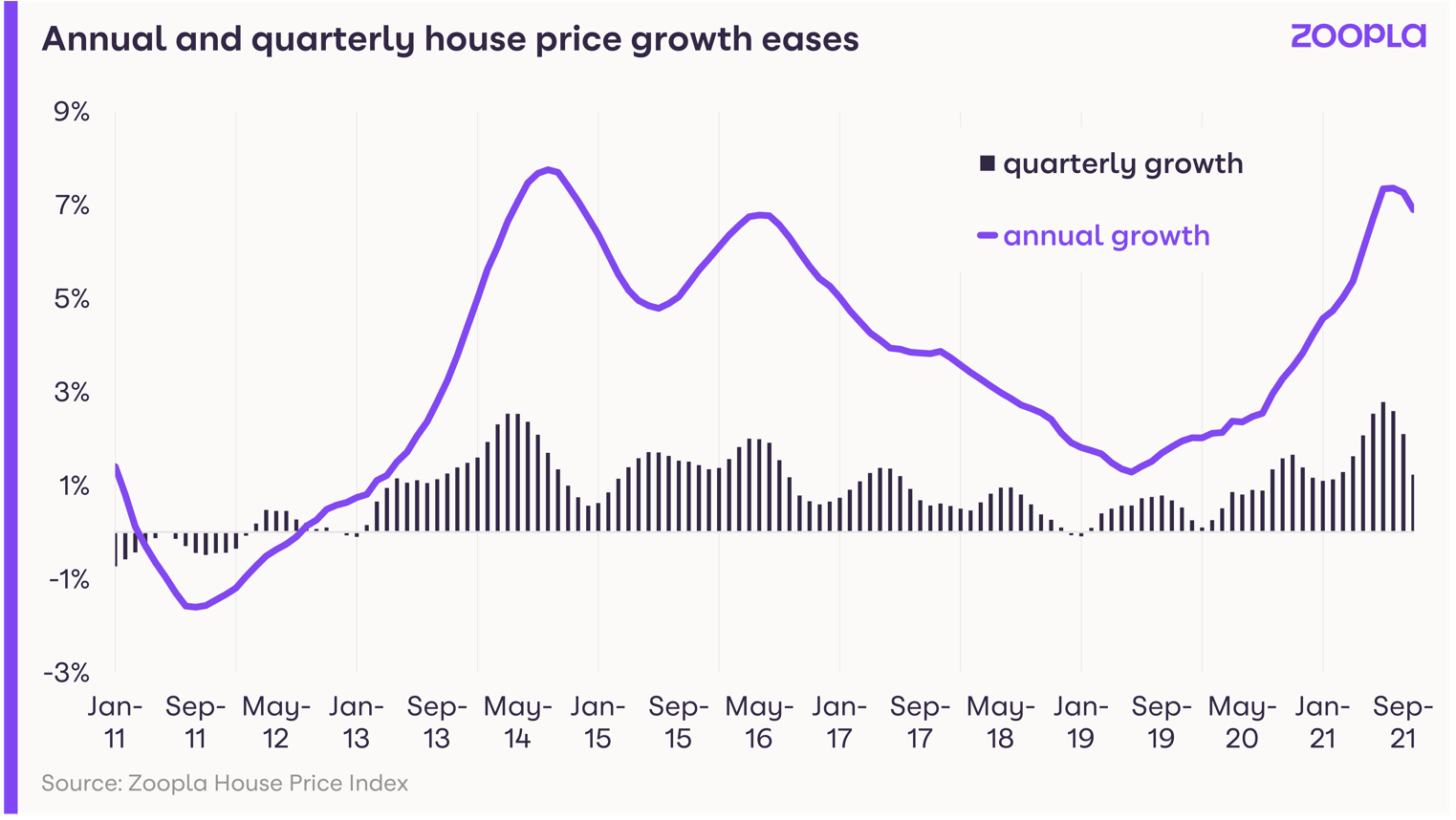 But as the chart above shows, while the annual rate of house price growth remains elevated, the rate of quarterly growth has started to ease, suggesting that house price growth may start to moderate – although this is unlikely to be a linear progression.

While the stamp duty holiday has ended, demand from purchasers remains higher than typical levels, suggesting that the ‘reassessment of home’ has further to run in 2022.

There will be a slowing in demand and activity as we move closer to Christmas – in line with seasonal trends, but we expect buyer demand to climb again as we move into Q1 next year.

Supply levels will also rise – new listings are typically 50% higher at the end of January compared to the beginning of December.

As we move through 2022, supply pipelines will have a chance to start to build after the busy early year market as the market normalises. This is one of the factors that will ease the upward momentum on pricing. Alongside this, next year will mark the emergence of economic headwinds as the rising cost of living, and potentially mortgages, impacts household finances.

At the same time however, even with several quarter point interest rate rises, mortgages will remain relatively low compared to longer-term norms, and the fact that many homeowners with mortgages are on fixed rates will shelter parts of the market from any immediate impact.

By the end of next year, we expect house price growth to be running at 3%. House prices will continue to rise in value in 2022 – the slowdown in the rate at which they do so may well have started.

Gráinne Gilmore is head of research at Zoopla.