After a record breaking year, the housing market appears to have peaked and is set to cool, new research shows.

The latest Reallymoving House Price Forecast shows residential property prices will rise by just 0.1% over the final quarter of 2021 as the post-pandemic property market settles into a period of slower growth.

Prices will rise 1.3% in October, but decline by 0.1% in November and 1.1% in December. Conveyancing quote volumes are also on a downward trend, indicating a drop in buyer demand.

Conveyancing quote volumes continue to decline steadily, falling 4% between August and September, further indicating that buyer demand is settling back down to more normal levels.

Reallymoving captures the purchase price buyers have agreed to pay when they search for conveyancing quotes through the comparison site, typically 12 weeks before they complete. This enables reallymoving to provide a three-month house price forecast that historically has closely tracked the Land Registry’s Price Paid data, published retrospectively.

It is estimated that house prices will rise by 1.3% in October as a result of deals agreed between buyers and sellers in July due to continued strong demand post stamp duty holiday and the limited supply of new properties coming on the market, creating greater competition for homes. This will be followed by a marginal fall of 0.1% in November and a larger drop of 1.1% in December, reflecting a drop in demand from buyers in the late summer as the post-pandemic property boom began to subside.

Following months of strong growth, house prices will rise by just 0.1% in the final quarter of 2021, bringing the average house price to £335,924 at the end of the year. 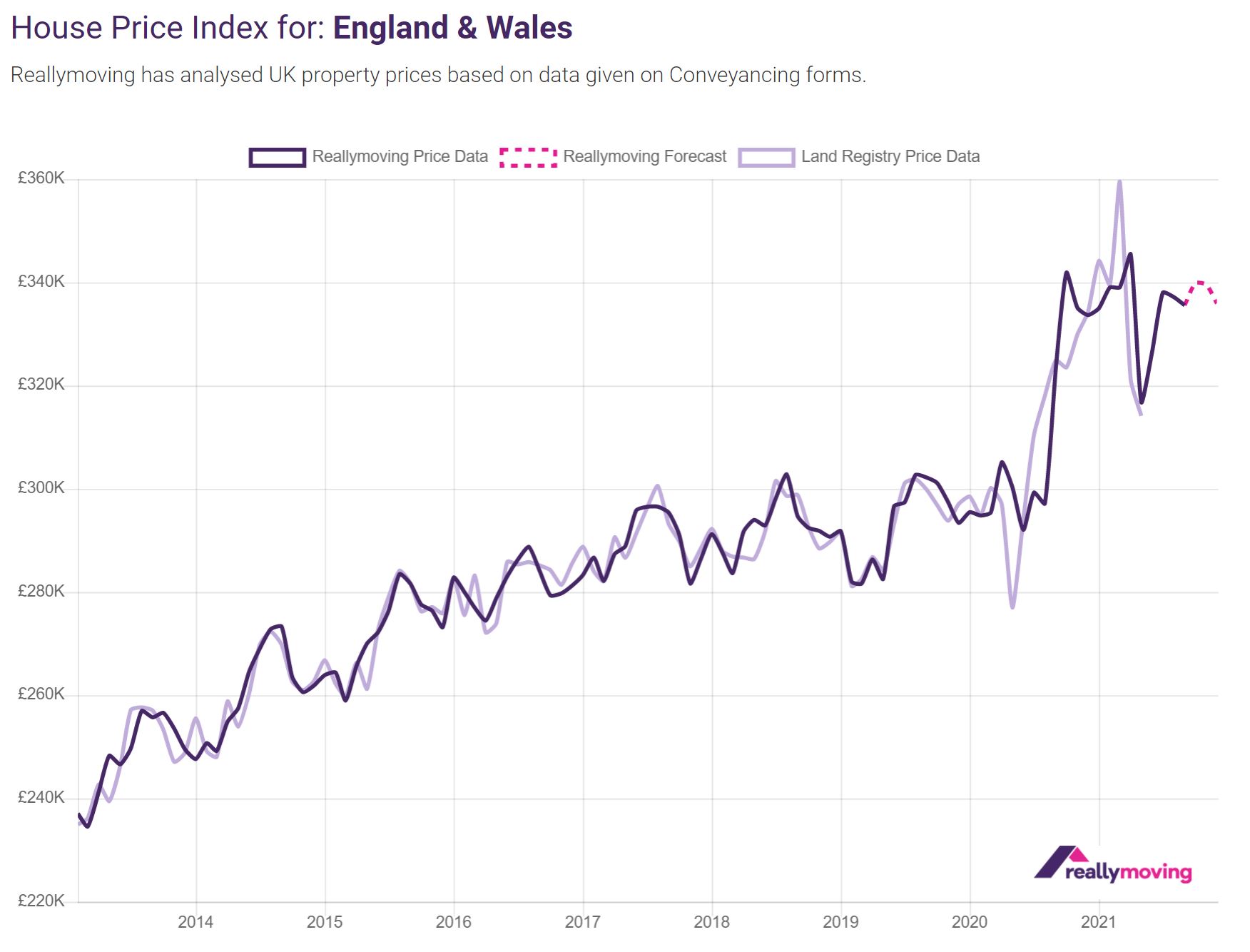 The shortage of stock as reported by agents is supporting property prices as the market adjusts to the end of all stamp duty incentives and the end of the furlough scheme, with the prospect of an imminent base rate rise an added incentive for buyers to get deals done as quickly as possible and secure a fixed rate mortgage deal while low-cost deals remain.

Rob Houghton, CEO of reallymoving, commented: “A return to slower growth and a steadier housing market is welcome, but there are a number of factors converging which could knock consumer confidence over the coming months such as the supply chain crisis, rising inflation and living costs, plus the prospect of increasing interest rates – though it’s too early to see their impact in the data yet. While the reduced supply of new homes for sale is making things difficult, buyers who are ready to move now are keen to press ahead and lock in a fixed-rate mortgage deal, helping keep their borrowing costs low.

“First-time buyers who have found themselves increasingly priced out of the market will be encouraged by evidence that the post-pandemic property boom is running out of steam, with prices falling over the final quarter in five UK regions and less competition for starter homes now that stamp duty incentives are over.

“For those who have held off making their move due to the frenzied market conditions over the last few months, now is a good time to buy and lock in a five-year fixed rate deal that will insulate them from any imminent rate rises and make it easier to ride out any short-term inflationary pressures.”