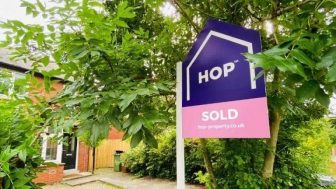 Following the recent drop in buyer demand, vendors have been advised to slash their asking price by 10% as rising mortgage rates make homes unaffordable for many buyers.

The estate agent’s advice follows months of economic uncertainty, which looks set to continue after the Bank of England said that the country faced one of its longest-ever recessions, and interest rates were hiked to 3%. Economists at Capital Economics predicted the day before the rate rise that house prices would drop by 12% by 2024.

“The problem we’ve got right now is the interest rates are making these properties unaffordable,” Gidney added. “There’s still interest out there, but people are genuinely worried. I think the combination of the fuel crisis, the cost of food, inflation and mortgage rates, I think people are extremely worried about it, and they are putting off these big decisions and maybe sitting on their hands for a bit.”

He said the sentiment among some first-time buyers was “why buy now when prices next year might be 10, 20, or 30% lower?”

He added that he knew of multiple buyers dropping out after an agreement because they were rethinking their decision.

But Tom Cranenburgh, who runs GetanOffer, said sellers should hold their nerve.

He commented: “We’ve certainly seen buyer enquiries drop off lately, but I’ve got a feeling this is just temporary. There are still lots of people who’d love to buy a home. If things get more stable soon, big price reductions shouldn’t be needed.

“There’s a simple reason why some are suggesting doing this and that’s overpricing. Some, in fact many agents, have at one time or another been guilty of overpricing property either with the owner’s blessing or worse, to get the property on the books. Many estate agents wrongly think it’s better to get a seller on the market [usually with a fixed term contract] and bring the price down later, than it is to be honest about price and lose the business to someone who isn’t.

“With the possible exception of a handful of sellers who are truly desperate, or who have discovered a defect with the house that necessitates a big drop, sellers chopping 10% off were never going to get their price, whatever the market conditions.”

Jonathan Rolande, the founder of property firm House Buy Fast, agrees. He added: “There’s no doubt the property market is under immense pressure right now and the time of year doesn’t help either, dark afternoons and Christmas are ahead of us.

“But if your agent is suggesting you knock 10% off the price of your most expensive asset, ask them why.

“Why, when the market is down less than 1% is this necessary? If they were the agent that suggested the price in the first place, I’d suggest you always get a second and third opinion first.”