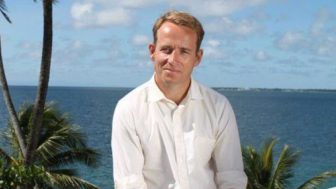 TV presenter Jonnie Irwin has accused those behind Channel 4 property show A Place in the Sun of dropping him after revealing that he had terminal cancer.

Irwin told The Sun that Freeform Productions “paid me off for the rest of the season and didn’t renew my contract”, which left him feeling down.

He revealed earlier this month that his lung cancer had spread to his brain.

Freeform and Channell 4 said that they could not find a way for him to stay, as they were unable to get insurance.

“Whilst we were unable to continue to film abroad with him, we’re delighted that he was able to remain as part of our team in the UK for exhibitions,” the companies said in a statement. “We of course understand how frustrating this must be for him at this incredibly difficult time.”

Irwin, 48, has been a presenter on A Place in the Sun since 2004, and has appeared on BBC One’s Escape to the Country since 2010. He was diagnosed in 2020 and was given six months to live, but did not make his illness public until recently.

In their joint statement, Freeform Productions and Channel 4 said: “Jonnie has been a hugely important part of the A Place in The Sun family for over 18 years and all of us were deeply saddened by his diagnosis.

“Much loved by everyone on the production, no stone was left unturned in trying to enable Jonnie to continue his international filming with us during Covid but the production company were unable to secure adequate insurance cover for him.”