The iconic, cutting-edge and sometimes controversial agent Greene & Co has been bought by Countrywide.

The firm, which found fame on television, has been bought for an undisclosed sum.

However, Eye understands that the sum paid by Countrywide, in a deal led by Hamptons, is at the very top of the range.

Sources describe the figure as “full fat”  and “eye popping” and say that a second corporate bidder baulked at paying the sum.

Late yesterday afternoon, branches at Greene & Co shut while staff were told of the news. See picture below.

They were also apparently told that founder David Pollock is stepping down as of today, as has now been confirmed.

The deal comes just one day after commentators laid bare the devastation wrought in the London property market in the run-up to election outcome uncertainty. However, with today’s result, of a Tory victory, the acquisition will undoubtedly be putting a large smile on Countrywide’s face.

The London business of Greene & Co, founded 30 years ago, has gained a cutting-edge reputation, carving out its name in places that were initially far from fashionable.

It has seven offices in West Hampstead, Maida Vale, Crouch End, Belsize Park, Clerkenwell, Kensall Rise and Queen’s Park. It also trades as Urban Spaces, which is part of the sale.

Yesterday evening, staff were sent an email saying that Greene & Co is “a fantastic geographic fit … that will provide a natural link with Hamptons branches in north and central London”.

The Greene & Co brand will stay for the moment. However, it is understood that a new identity will tie it in with Hamptons and could be ‘Greene & Co from Hamptons’ or similar.

The email said that the company management team will remain in place, reporting direct to Phil Tennant, the chief operating officer at Hamptons, “as an interim measure”.

The email is signed by Marc Goldberg, Lesley Cairns and Phil Tennant, but makes no mention of Pollock.

The firm famously appeared in a six-part fly-on-the-wall TV documentary about estate agents in 2004 and featured an away day to a pub in Wales for staff training purposes.

Greene & Co went on to attract controversy when six members of staff were prosecuted over car parking permits. They had used addresses of flats they were selling to fraudulently apply for residents’ permits.

However, the firm has gained plaudits for its expansion strategy and the way it has associated itself with ultra-cool design.

It has also won employer awards, including the Sunday Times 100 Best Companies to Work For.

Staff get days off on their birthdays, plus life coaching.

The firm, which works across a diverse area in London, has staff members who between them can speak 16 different languages. 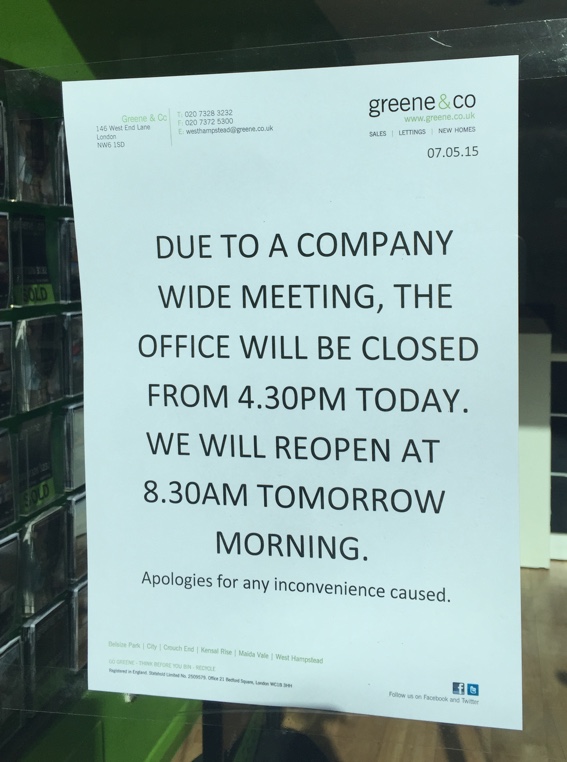