The son of Emoov founder Russell Quirk has written a reflective defence on social media of proptech and entrepreneurship.

Callum Quirk has also made it very clear that investors in the business knew exactly what they were backing – and he pays warm tribute to his father.

On his LinkedIn page, the article appears under the headline ‘Emooving on’.

In it he says: “For stakeholders including crowdfunding investors, this is an unfortunate time as ordinary people put their hard earned cash on the line along with existing shareholders – an admirable gesture to own a part of something exciting.

“It should be recalled that both funding rounds were also backed by established VCs with financial information and forecasts outlining the future prosperity of the business.

“This was no ‘punt’ but an investment with one’s own capital at risk.

“Everyone should be fully aware that there is never a guaranteed pot of gold when making investments despite any noted previous success.

“It is inherently risky in nature with the majority of start-ups failing in their first few years and only a handful reaching a successful exit (trade sale/IPO).

“In all, though, the news is disappointing for fellow ambassadors and staff where jobs and finances are now on the line.

“However, people will move on to pastures new and take some valuable life lessons with them moving forward, including the person who never stopped believing.

“A person who I’m incredibly close to, who put their family and social ties aside for nine years, all to work for a more prosperous future. I have never known anyone so determined.

“Start-ups and entrepreneurs are often overlooked in society with their sheer boldness to make a difference in the world, risking it all no matter how big or small.

“I empathise with anyone who sees opportunity and is willing to fight for it despite ongoing pressures from board members and sceptical outsiders.”

Quirk junior’s LinkedIn profile reveals that he worked for Emoov between May and November this year. His CV also include a stint as an intern at Crowdcube while at the University of Greenwich from which he graduated with a first-class degree, and produced a dissertation on crowdfunding as an alternative means of financing SMEs:

According to the Telegraph, 140 jobs are due to be lost at Emoov. 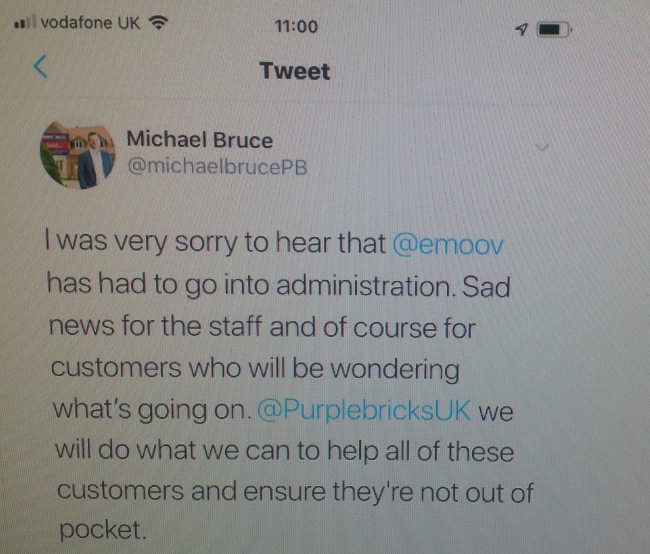