Shelter is keeping up the pressure on the Government – whichever it may be – to ban letting agent fees.

Yesterday it tweeted a message, below, asking: “Hit reply to tell us what you’ve spent on letting agent fees and we’ll present it to the government. Let’s make sure the ban goes through.”

Meanwhile, campaigners held an anti-fees protest outside an agent’s office in Bristol at the weekend.

Jane McDowell, Bristol co-ordinator for Acorn, said that the average fees charged by six agents on North Street for a two-bed property costing £950 a month to rent came to £1,140.

She said: “How is this affordable for ordinary people?”

The Bristol Post report is in the link below.

The consultation on the forthcoming ban asks questions of detail rather than principle, and closes shortly after the election next month. 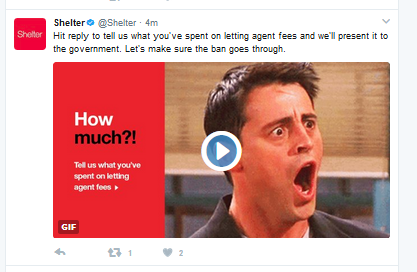