Agents are getting into the festive spirit with the launch of Christmas charity campaigns.

Foodbanks will be set up across 50 offices from Sunday, with donations delivered to local charities.

It is led by Winkworth franchisee Nick Goble.

He said: “At a time when there is so much uncertainty and ‘doom and gloom’, we felt we needed to give a bit more back to the community and help to generate some goodwill over the festive period.

“We’re appealing for non-perishable food items and pieces of clothing and toys from both our clients who are moving home and may no longer need some of these items, as well as the wider local community.”

The list of participating offices can be found at: www.winkworth.co.uk/articles/winkworth-launches-christmas-foodbank-appeal.

Meanwhile, Countrywide brand Finders Keepers is running an online auction on its website to raise money for the Oxford Children’s Hospital.

Prizes, including a tasting menu at a Michelin star restaurant and signed F1 merchandise, have been donated by local businesses.

It forms part of the Oxfordshire-based agent’s target of raising £10,000 for the hospital this year, of which 75% has been raised so far from staff working hard at bake sales, half marathons and sky dives as well as a quiz.

Money has also been raised for the hospital this year by another Oxfordshire agent, Penny & Sinclair.

The independent agency raised £9,000 in March after staff took part in the OX5 Run at Blenheim Palace.

Its employees are now planning a range of Christmas charity events including taking part in the Frosty 5k event at University Parks in Central Oxford to raise money for hospice care charity Helen & Douglas House, as well as a Christmas Jumper Day for Save the Children.

Staff and clients from the business have also purchased and donated 155 products from charity Family Action’s toy appeal.

The appeal guarantees that a specific child from a disadvantaged family helped by the charity will have a present to open on Christmas.

Lizanne Simmons, associate director of Penny & Sinclair, pictured, said: “Being given a specific list of children has really brought home the meaning of Christmas and we are proud to be supporting such a worthwhile cause.” 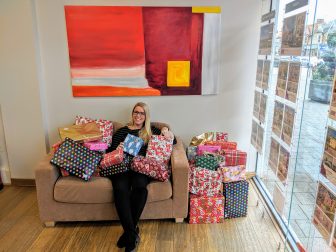