The main party election manifestos may promise to reform the housing market and build more homes, but what has a Conservative or Labour government meant historically for house prices?

The study measured property values – based on Nationwide’s house price index rather than the more widely used Land Registry – at the beginning and end of each Prime Minister’s term while also taking account of inflation.

In real terms, all four Labour Prime Ministers since 1974 resulted in house price growth of 119% versus 5% growth under the four Conservative leaders that there have been up to but not including Boris Johnson.

The highest house price growth under a single leader came with Tory PM Margaret Thatcher between 1979 and 1990, at 188% over her term in office or 25% with inflation applied.

At least some was due to the introduction of Right to Buy and a rush to use the multiple mortgage relief portion of mortgage interest relief before it was scrapped in 1988.

Labour’s Gordon Brown – whose premiership coincided with the 2008 financial crisis – presided over the lowest annual house price growth of all prime ministers, with a 7% decline, or 14% with inflation.

The Help to Buy scheme may have been introduced under David Cameron, but house price growth was at zero in real terms or up 22% during his tenure between 2010 and 2016.

His successor Theresa May oversaw the scrapping of Stamp Duty for first-time buyers but house price growth was still at zero with inflation and up 5% without.

There is not enough data to make a judgement on Boris Johnson.

There are regional variations, with the highest growth between 1974 and 2019 in the north-west of England under Labour, but London is on top under the Conservatives overall.

The lowest growth under Labour was in Northern Ireland and the east midlands, while the north of England and Scotland fare worse under Tory rule.

Property finance information website Online Mortgage Advisor, which conducted the research, said: “The data seems to dispel the common belief that the Conservatives boost the property market with a focus on home ownership.

“That said, are house price increases always a good thing for the market?” 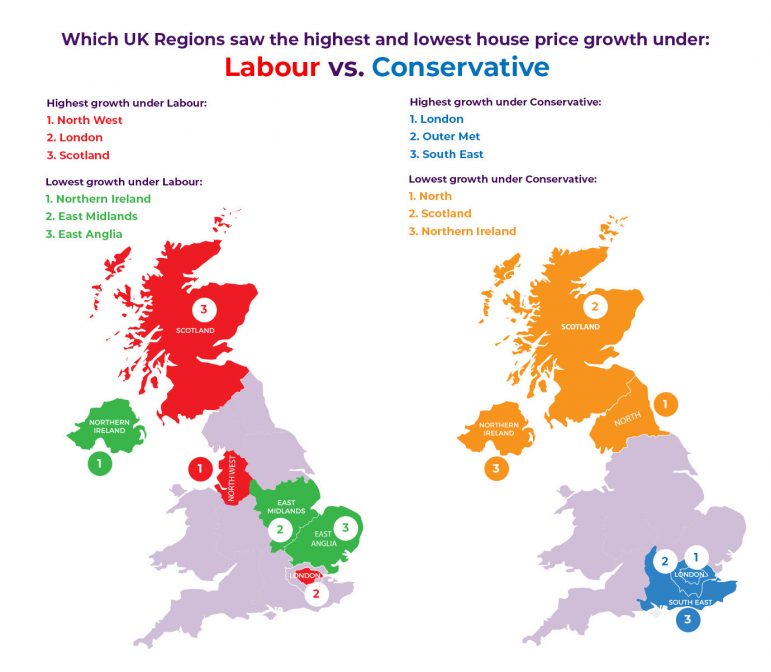