A three-branch estate agent in the Home Counties says it is being “held to ransom by Rightmove” which is raising its subscriptions both this year and next.

The agency says that the hikes mean that it will be paying £18,000 more over the next two years, for what he believes will be the same package.

For one of its branches, the increase will be £400 per month.

The agent said he viewed the rises as “disgusting in a tough market” and said he had been told they were non-negotiable.

The agent also claimed that firms in their county were being charged more than central London agents.

However, Rightmove robustly defended the price rises and said it was changing its packages.

Last night a spokesperson told us: “Just over a year ago we let agents know that over the course of 2018 we would be replacing our legacy Gold and Premium packages with the three current membership packages: Essential, Enhanced and Optimiser.

“Each package puts an agent’s brand and properties in front of the UK’s biggest home-hunting audience, gives them the use of market intelligence reports to help them win business, and offers access to Rightmove’s training events.

“The Essential package is for those who want to access the most engaged home-hunting audience, Enhanced is for those looking to grow their market share, and Optimiser is for those who already are or who have ambitions to become market leader in their local area.

“The package costs reflect the level of exposure that an agent gets on Rightmove.

In April, during a ‘discovery day’, Rightmove priced its new packages as follows: 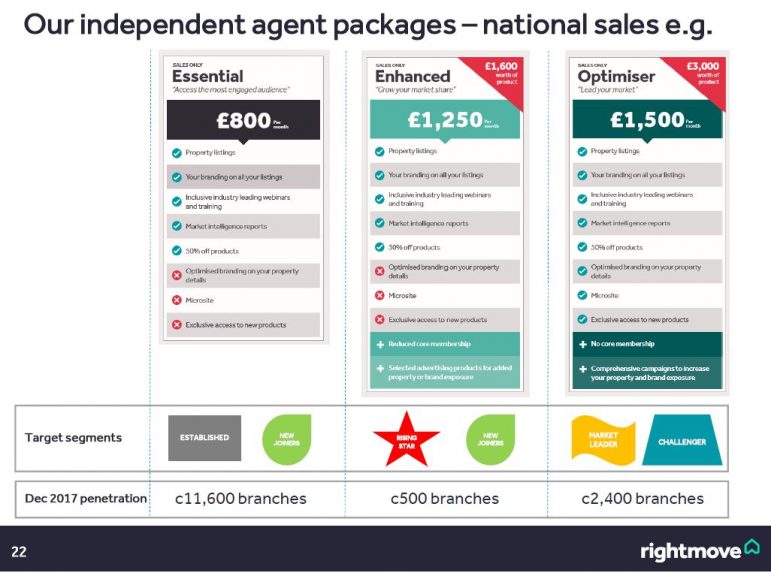