The cost of moving home has risen sharply – from £6,877 before the end of the main stamp duty holiday on 30th June 2021 to a record high of £11,777 – meaning the average person buying and selling a home in England is required to find an extra £4,900 in up-front costs, according to Reallymoving’s annual Cost of Moving research.

The comparison site for home move services has analysed data from 320,000 quotes in the last year to reveal that while estate agent fees and conveyancing fees have fallen since 30th June, the return of stamp duty for properties worth over £250,000, along with rising survey and removal costs mean it’s more expensive than ever to move home. This is in part due to rising house prices, which impact associated costs, as well as higher demand for services.

The largest expense for home movers who are both buying and selling, is once again stamp duty, which has risen from £0 based on the average purchase price in England of £349,500, to £5,000. 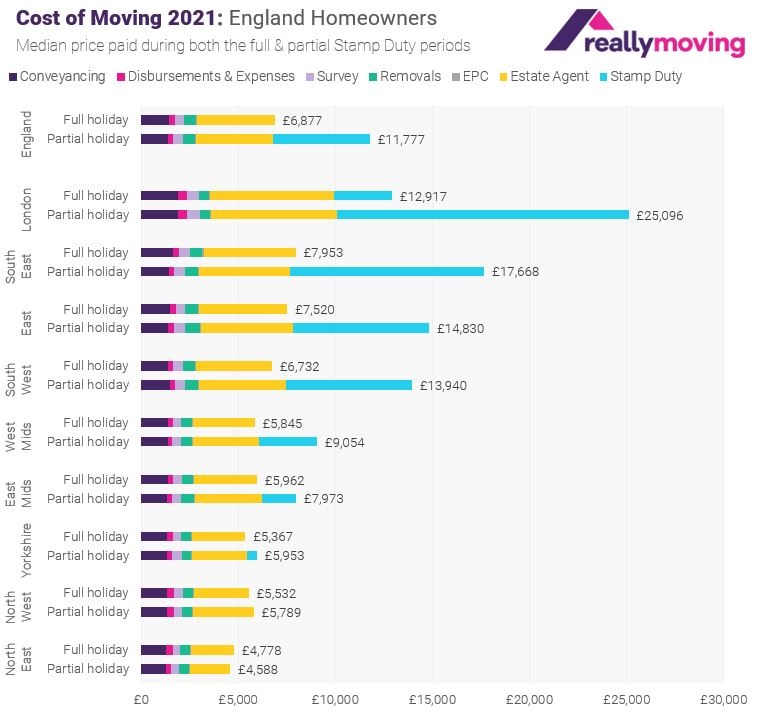 Those moving in the most expensive regions, such as London and the South East, East of England the South West, benefited most from the stamp duty giveaway and have faced some of the biggest rise in prices since the most generous part of the holiday ended.

By comparison, less expensive regions in the north still escape paying stamp duty or pay a minimal amount based on the median purchase price, resulting in only moderate increases in the cost of moving, while existing homeowners in the North East have actually seen the cost of moving fall from £4,778 to £4,500 due to a dip in estate agency and conveyancing fees.

Homeowners in Scotland have also felt the pain of rising moving costs, but the rate of increase is around half that in Wales, at 47%, driven by the return of Land and Buildings Transaction Tax (LBBT) on top of a 6% rise in estate agency fees and a 3% rise in legal fees – both linked to an increase in house prices.

While London’s First Time Buyers have seen the biggest hikes of all, those across the rest of the UK have seen relative stability in the cost of moving, being once again the only group to benefit from paying no stamp duty on purchases up to £300,000.

The average cost of moving for a First Time Buyer in England dipped by 1% after 30th June due to a fall in conveyancing costs as demand fell, reducing pressure on the sector. First Time Buyers in the East and West Midlands and the East of England have seen the cost of moving fall further, by 2%, 3% and 2% respectively, as the market returns to more normal levels of activity.

First Time Buyers in Wales have seen the cost of moving stay the same at £1,908 while in Scotland costs have increased by 7% – largely due to a rise in average removals prices from £300 to £365. 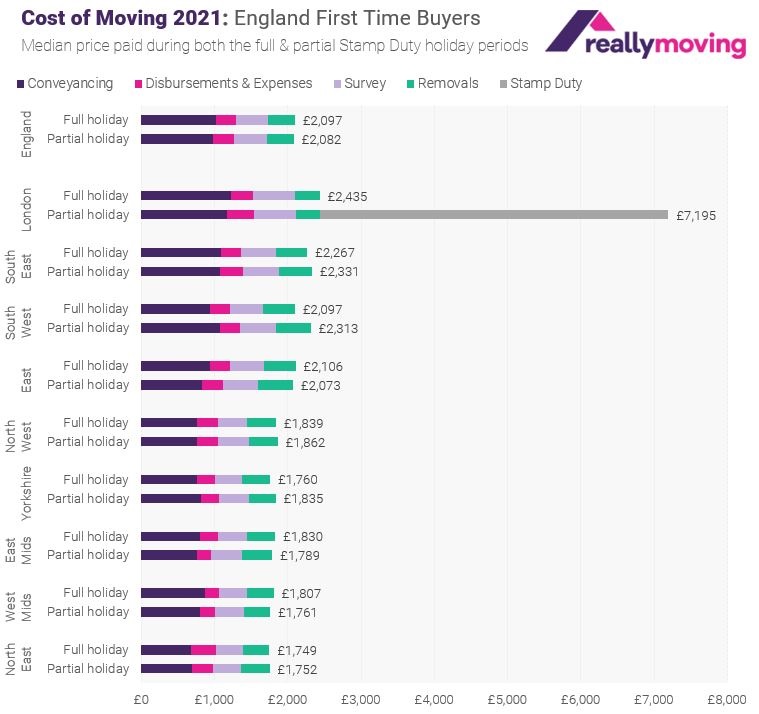 “The cost of moving home is at a record high and movers have had to absorb a huge hike in up-front costs since the main stamp duty holiday ended on 30th June. These rises have been felt most in London, with movers in the capital having to find over £25,000 – and over £7,000 for First Time Buyers, which is a significant challenge on top of raising a deposit.

“We saw an increase in conveyancing and removals costs in England during the stamp duty holiday due to exceptional levels of demand, but conveyancing costs have dropped slightly since the end of June as pressure on the system has eased.

“First Time Buyers will be relieved to be once again the only group to benefit from stamp duty exemptions on lower cost homes, reducing competition from other buyers. The cost of moving for First Time Buyers in England is high, at over £2,000, but the good news is that expenses have remained relatively stable, making it easier to plan a move.

“The property market remains buoyant with strong competition for homes, so it’s more important than ever to compare ratings and customer reviews when searching for home move services, as well as price, to ensure that when you do decide to buy, your transaction progresses as smoothly as possible.”