An analyst says that Purplebricks has hit a glass ceiling in terms of market share – it is profitable but its revenue growth in the UK has effectively stopped.

Mike DelPrete, analysing Purplebricks’ results for the first half of its 2019/2020 financial year (the six months to the end of October), says that these reveal a business “whose growth has clearly plateaued and reached maturity in the UK”.

He goes on: “The company appears to have reached peak efficiency, putting a ceiling on its future growth prospects.”

However, DelPrete does say that Purplebricks’ profitability in the UK is a “rarity in the world of real estate tech brokerages”, pointing out that similar businesses overseas, such as Redfin, Compass and Opendoor, are all unprofitable.

DelPrete also says that the fundamentals of the Purplebricks business model are sound.

However, customer numbers as measured by ‘instructions to sell’ have remained flat over the last two and a half years.

DelPrete also says that the cost of customer acquisition has changed little in three years, at £375 per customer.

DelPrete concludes: “I continue to use Purplebricks as a case study of successful disruption in my university course on real estate tech. Going from an idea to the largest estate agent by market share in the UK, with a profitable business model (in the UK, at least), is impressive and worthy of study.

“In the UK, Purplebricks succeeded where every other hybrid agency failed: by scaling.

“While its competitors slowly went out of business while failing to demonstrate a path to profitability, Purplebricks – partially through sheer force of will and spending power – managed to scale to the point of profitability.

“But while Purplebricks managed to cross that first chasm, it never really made it over the next one: becoming a platform. The business still scales linearly based on marketing spend and people; I’ve yet to see evidence to support a credible path to double-digit market share.

“In the UK this may be as big as the business can get – a high-water mark for the hybrid agency model.”

Below, customer instructions for the first half of its 2019/2020 financial year, the six months to the end of October 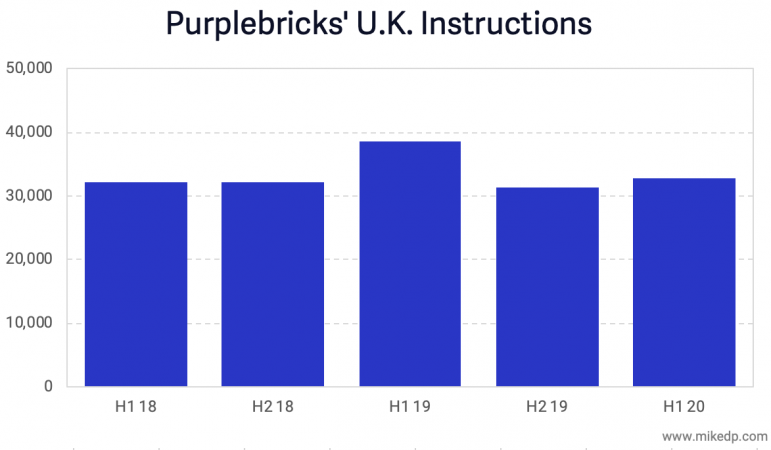