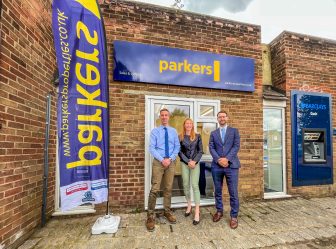 A new estate agency has been opened in the village of Eynsham, around four miles east of Witney in West Oxfordshire.

The new office will trade as Parkers, part of the Property Franchise Group, and will be run by experienced estate agents Brendan and Lisa Kay, who also own the Witney branch of Parkers.

Brendan Kay said: “The Eynsham office is something we’ve been working towards for quite a while, so we’re delighted to have got to the point where we’ve opened the business.

“We’ve always had more branches in mind and Covid put some of those plans on ice for a while, but we’ve had a fantastic past year and now opening this new office has capped that off nicely.

“Eynsham is a large and growing village and has been earmarked by the government to become a garden village – meaning 2,500 new homes will be built on the edge of the existing village.

“It’s a great area with superb property values and is very much part of the West Oxfordshire commuter belt, while also being close to the countryside.

“It’s also an area that didn’t have a physical estate agent so the combination of all of that made it the obvious choice for us.”

The new Parkers Eynsham branch will be run by incoming manager Josh Wicks, who has relocated to West Oxfordshire from Royal Leamington Spa, where he was branch manager of Allsop & Allsop.

Kay added: “We’ve hired a fantastic branch manager in Josh who has a number of years’ experience in the role, and he’ll be looking after the Eynsham office.

“As well as setting up the new branch, we’re also now able to offer financial services from the Eynsham office, including mortgages and protection advice, so it’s been a hugely busy but exciting time and we’re relishing being part of Eynsham’s growth and popularity.”

Parkers’ managing director, Rob Smith, commented: “Brendan and Lisa have enjoyed a huge amount of success in Witney since their rebrand in 2019 and being able to open a second branch in Eynsham is testament to their hard work and passion.

“Josh is a fantastic addition to the team, too, and I look forward to seeing them continue to grow their business alongside the high levels of customer service they’re renowned for in Witney.”