The accounts, signed off in May 2018 but only just filed at Companies House, cover the year to the end of last March.

The documents state that lenders who backed the business to the tune of £17m just over a year ago “do not currently intend to recall those loans”.

However, the accounts cast doubts as to how they could be repaid if the debts were to be recalled. Dunstone and another backer, Toscafund, have registered charges.

Pre-tax losses were £13.6m for the year to last March.

For the second year running, there were no dividends paid or proposed.

The document also says that since the end of March 2018, the company has received £2.5m by way of loans, plus further investment of £1.5m.

The accounts show turnover of £2.5m, up from £2.2m the previous year, but with an escalating cost of sales: £1.2m in the year to last March, compared with £915,000 the year before (note: these are rounded figures).

The documents state: “The Board have prepared forecasts for the period to 31 May 2019 which indicate that the company can continue to trade within its cash resources for the twelve months following the signing of these financial statements.

“Furthermore, the holders of the loan notes negotiated in December 2017, totalling £17m, have advised that they do not currently intend to recall those loans in the 12 month period following the date on which the financial statements are signed.

“Therefore the directors have a reasonable expectation that the company has adequate resources to continue to trade for the foreseeable future.”

The documents say that the average number of employees for its last financial year was 93, up from 59 the previous year.

Dunstone and his business partner Roger Taylor backed HouseSimple to the tune of £5m in 2015, and then led an investment round in 2016 which chipped in a further £13m.

Dunstone was then among a group of investors ploughing in what was reported to be an extra £20m in December 2017 – although the latest accounts refer to £17m in loan notes that month.

That same month, it was announced that founder Alex Gosling was moving to the position of president, to be replaced as chief executive by Sam Mitchell, who duly joined in January 2018 from his previous job as head of lettings at Rightmove.

There are four charges outstanding against the firm according to Companies House – Sir Charles Dunstone has registered three of them, and Toscafund – which also backs easyProperty – the other.

Altogether, EYE calculated that Housesimple as of last February received £33m in backing, but this would have been before the further loans and investment mentioned in the latest documents. 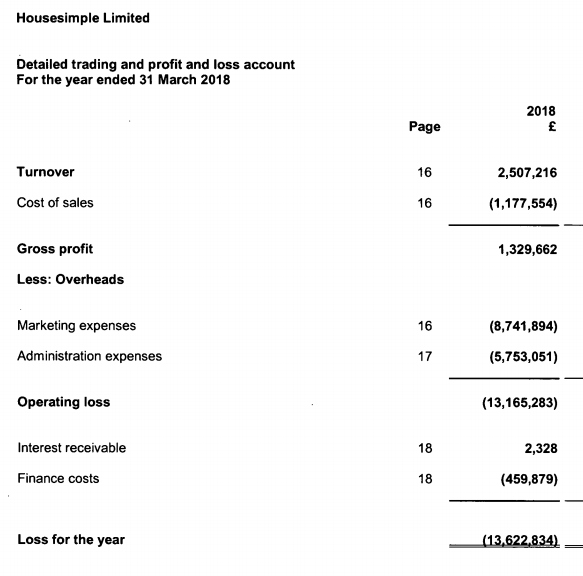 HouseSimple secures £20m from investors to take on Purplebricks