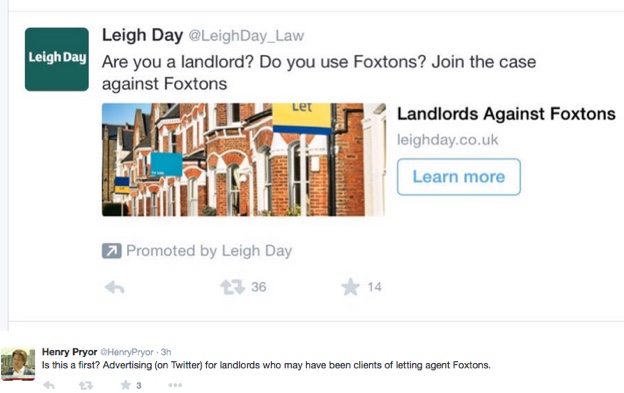 The TV presenters Lynn Faulds Wood and her husband John Stapleton are set to join up to 100 landlords in an action against Foxtons.

The pair, who are former presenters of Watchdog and specialise in consumer rights, are among the landlords who may form a group action being organised by  law firm Leigh Day which is alleging that landlords have faced “secret” mark-ups on repair bills.

The couple have used Foxtons for a property they own in London.

Faulds Wood told the Mail on Sunday she felt “cheated” after learning that Foxtons was accused of charging “secret commissions” and produced emails.

In one, sent to Stapleton on May 28 this year, Foxtons said the cost for materials, shower enclosure, shower door, a mould resistant silicon seal and disposal of old enclosure and door would cost £958 plus VAT. Labour by two plumbers for one day would be £810 plus VAT.

Stapleton replied: “As you know our man resolved this problem for less than £400. Your recommended plumbers were proposing a charge of more than four times that and that didn’t include re-decoration.

“. . . [It] has merely confirmed my belief that there is something worrying about the relationship between Foxtons and their favoured contractors.”

Leigh Day, which says it has received more than 100 inquiries, is using Twitter, see above, to recruit landlords.

Leigh Day launched its bid for a group action – which it says could cost Foxtons up to £42m – after taking on the case of one landlord, Dr Chris Townley, a law lecturer, who discovered alleged mark-ups on a contractor’s repair bill.

Leigh Day claims that these were “hidden” fees and that other landlords with contracts with Foxtons could be entitled to compensation, even if they have not had repair work done.

The firm has also said that other letting agents could be dragged into the dispute if they also charge mark-ups.

Leigh Day is also using Twitter to promote a short video, below, about the case in which it puts forward its arguments.

Foxtons insists it is open and clear about its fees.

For what it has to say about earning commission from suppliers, see clause 3.3 in its terms and conditions http://www.foxtons.co.uk/landlord/terms/terms_and_conditions.html

The voluntary Private Rented Sector Code of Practice, approved by ARLA, NALS and RICS among others, and with an introduction by housing minister Brandon Lewis, says this: “You should disclose any commission you might receive from the contractor at the time that estimates are provided to the landlord.”

The code, published last autumn, is however silent on agents’ mark-ups charged to clients.

It does say that agents should check for conflicts of interest before accepting instructions from landlords.