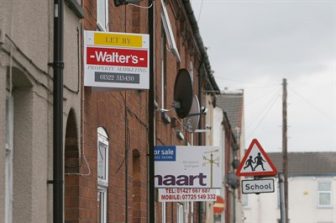 Robert Gardner, Nationwide’s Chief Economist, said: “October saw a sharp slowdown in annual house price growth, to 7.2% from 9.5% in September. Prices fell by 0.9% month-on-month, after taking account of seasonal effects, the first such fall since July 2021 and the largest since June 2020.

“The market has undoubtedly been impacted by the turmoil following the mini-Budget, which led to a sharp rise in market interest rates. Higher borrowing costs have added to stretched housing affordability at a time when household finances are already under pressure from high inflation.

“For example, the increase in mortgage rates meant that a prospective first-time buyer (FTB) earning the average wage and looking to buy a typical FTB home with a 20% deposit would see their monthly mortgage payment rise from c.34% of take-home pay to c.45%, based on an average mortgage rate of 5.5%. This is similar to the ratio prevailing before the financial crisis.

According to the data provide by Nationwide this morning, the market looks set to slow in the coming quarters. Inflation will remain high for some time yet and Bank Rate is likely to rise further as the Bank of England seeks to ensure demand in the economy slows to relieve domestic price pressures.

The outlook is extremely uncertain, and much will depend on how the broader economy performs, but a relatively soft landing is still possible. Longer term borrowing costs have fallen back in recent weeks and may moderate further if investor sentiment continues to recover. Given the weak growth outlook, labour market conditions are likely to soften, but they are starting from a robust position, with unemployment at near 50-year lows.

Moreover, household balance sheets appear in relatively good shape with significant protection from higher borrowing costs, at least for a period, with over 85% of mortgage balances on fixed interest rates. Stretched housing affordability is also a reflection of underlying supply constraints, which should provide some support for prices.

Gardner continued: “The government’s ‘Energy Price Guarantee’ means a typical UK household will now pay an average of £2,500 a year on their energy costs until next April. This is c.£1,000 a year below Ofgem’s previously announced price cap, that was due to take effect from 1 October and will help shield households from the soaring cost of energy on wholesale markets.

“Despite this intervention, energy costs are still going to be around 80% higher than a year ago, even after taking account of the £400 energy support scheme discount. It is important to note that the cap is on the unit price charged to consumers, rather than a maximum bill a household can be charged. Running costs for less energy efficient properties tend to be considerably higher, leaving these households particularly vulnerable to price rises.

“Average energy costs for the most energy efficient properties (those rated A-C as reported on energy performance certificates) are expected to rise to c.£1,800 per year, compared with around £1,000 a year ago.

“Typical bills for D-rated properties (the most common type) are set to rise to £2,600 a year. Those in E-rated properties will be paying around £120 a month more than last winter. However, those living in the least efficient properties (rated F-G) will see average bills rise to c.£4,500, an extra £185 a month compared with a year ago, though these properties make up a small proportion (c.2%) of the stock of housing with a mortgage.

“The cost-of-living crisis is set to disproportionately affect lower income households as they spend a higher proportion of their income on essentials (food, gas and electricity). Lower income households are also much less likely to have accumulated savings, so they will find it more difficult to cover the increase in these costs.

“Further, following the recent announcement that the blanket guarantee has been scaled back to last for six months (compared with two years previously), there is additional uncertainty about what will happen thereafter if global energy prices remain high.”