There will be an imminent exodus of landlords in Scotland in the light of the removal of the ‘no fault’ ground for repossession and the likely introduction of rent controls.

New research from lettings portal Citylets quizzed 500 landlords, of whom half have been in the sector for over a decade, with most operating in the big three cities.

Nearly a third say they will quit the private rented sector or reduce their portfolios after the Scottish Government announced its decision to remove ‘no fault’ grounds for repossession.

Landlords will no longer be able to regain their properties simply because the tenancy period has come to an end.

Almost four in ten landlords say they are likely to leave the PRS or reduce their portfolios should rent controls be introduced.

The Scottish Government is currently consulting on its plans to introduce controls in “rent pressure” areas, asking how these should be identified and administered.

Only 23% in the Citylets survey said their sentiment towards remaining a landlord now and in the future would remain fully unchanged.

Landlords with larger portfolios of more than five properties are the most likely to quit.

Of these, 43% said they will leave altogether or reduce their portfolio in light of ‘no fault’ removal and 54% would quit in the event that rent controls are confirmed.

Thomas Ashdown, founder of Citylets, said: “We felt the response form to the current consultation missed the opportunity to ask landlords a few straightforward questions in relation to their appetite to remain in the sector in light of changes confirmed and proposed.

“Our findings must be of concern to all stakeholders to the debate.

“I no longer see how it is possible to contend that the current plans are consistent with the oft stated aim to see the PRS made better without deterring investment and threatening supply. Even allowing for some cooling off of sentiment, the findings are clear.”

“Citylets is not a political or representative body, with the intent our research can find resonance in all quarters. We hope this will pay dividends today more than ever – nobody wants to see supply worsening in the Scottish PRS.

“There is clear inevitability of unintended consequences to what is being proposed. This seems set to exacerbate the housing crisis and create more homelessness, not less.”

The key findings of the Citylets Landlord Survey are:

Ashdown said that of the 500 landlords who took part in the survey, every single one “took the trouble to offer qualified statements and not a single respondent offered profanity. I think that’s noteworthy of a group 73% of which feels no less than vilified and speaks volumes about the calibre of the vast majority of individuals in the sector.

“As an absolute minimum, the Citylets Landlord Survey surely represents a mandate for policymakers to explore the issue of landlord exodus in more detail and build on the work we have begun.” 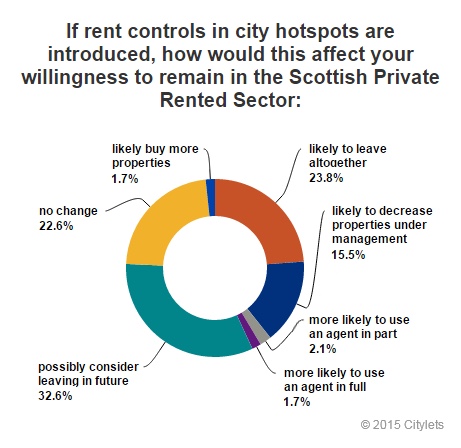