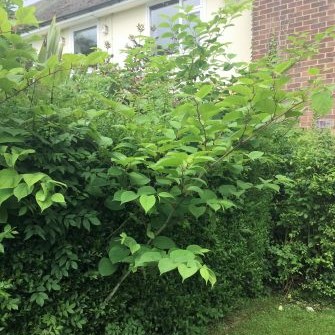 Digging Japanese knotweed out of the ground is the most effective way to preserve a property’s value, new research carried out by YouGov for Environet UK shows.

The study also found that homebuyers were less reassured if a knotweed infestation has been herbicide treated – meaning it could recur.

Earlier this year The Royal Institute of Chartered Surveyors (RICS) relaxed its guidance to encourage herbicide-based methods of dealing with Japanese knotweed, which aim to control the plant rather than eradicate it, but the research shows that buyers would be considerably less comfortable purchasing a property where there’s a high chance the plant is still present and induced into dormancy. This could potentially affect their willingness to buy the property and the price they are prepared to pay.

Japanese knotweed, the UK’s most invasive plant, currently affects approximately 4% of homes in the UK, either directly or indirectly – neighbouring property – with notable hotspots in Bolton, Bristol, Merseyside, North Wales and London.

Herbicide treatments can only be carried out during the growing season, from May to September, and can take two to three years to complete. The root system remains in the ground and can be prompted to regrow if disturbed, such as through landscaping or building work.

Excavation of knotweed can be carried out at any time of year and is the most effective way of dealing with the problem, removing the rhizome from the ground with immediate results.

While there is often a ‘knotweed stigma’ impacting the appeal of properties affected by the invasive plant, as long as an infestation is professionally treated with an insurance-backed guarantee, mortgages can be secured and sales can proceed.

Awareness of Japanese knotweed among the public continues to grow – now 82% compared to 77% in 2021 – meaning buyers are better-informed of the risks. However, awareness is considerably lower in younger age groups, with just 42% of 18–24-year-olds having heard of the plant compared to 81% of 35-44-year-olds and 96% of over 55s.

If knotweed was discovered after moving into a property, more than three quarters – 77% – of people surveyed would be concerned, the main reasons being the cost of treatment/removal (selected by 81% of respondents), damage to property and gardens (77%), problems selling in the future (69%), the potential impact on the property’s value (65%), and the risk of the plant spreading to a neighbouring property (49%). This suggests that the risks associated with the plant spreading into adjoining property, prompting a legal claim for encroachment, are not fully understood, since the expense arising from such a claim can dwarf all other costs.

Worryingly, 28% of people who stated they would not be concerned to discover knotweed on a property after they had bought it, believe they can treat the problem themselves.

Knotweed’s extensive underground root system makes it notoriously difficult to remove and it can regrow from a tiny fragment left in the soil, which is why mortgage lenders insist on evidence of professional removal and guarantees for the work before they will offer a loan on an affected property.

Nic Seal, founder and MD of Environet, said, “New guidance for surveyors dealing with knotweed, published by RICS earlier this year, suggests that control of knotweed may be a more appropriate goal than eradication. Yet this research suggests buyers don’t necessarily agree.

“Knotweed is now so widespread that we do need to enable sales of affected properties to progress as smoothly as possible, but there’s no doubt that removing the plant altogether will make the property easier to sell. By settling for ‘control’ through herbicide treatment, the bar is lowered for the sake of a smaller initial cost – but this could have a significant impact on the sale value of the property, costing homeowners much more in the long run.

“The best way to preserve a property’s value is to professionally excavate the infestation, secure a ten-year IBG and be honest and up front with potential buyers.”