House prices have increased by 7.6% over the past 12 months, the fastest rate of property inflation in over four years according to Halifax, but there are growing signs that prices will fall in January and February as the post-lockdown boom ends. 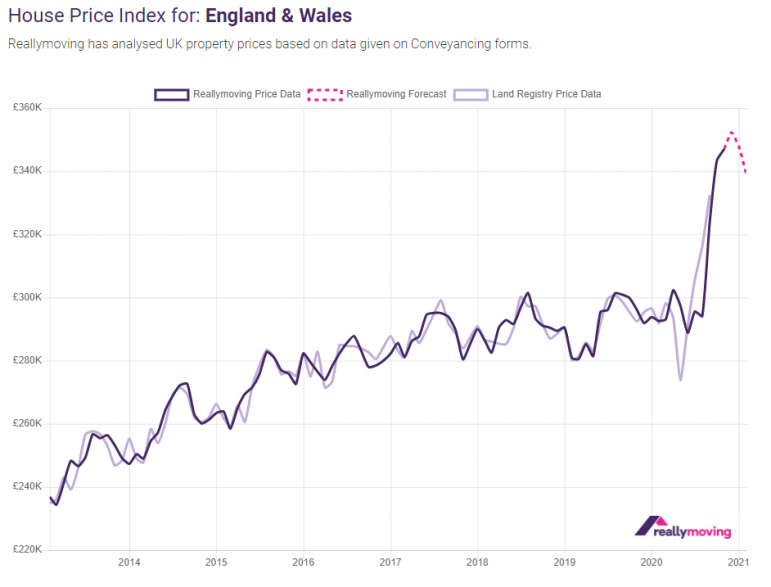 The New Year will herald a turning point for the housing market, with a Christmas peak in prices followed by negative growth of -1.2% in January and -2.5% in February 2021, according to the Reallymoving house price forecast.

Collected at the start of the homebuying process, when buyers agree a deal and seek conveyancing quotes, the data provides one of the earliest snapshots of the short-term property market outlook and confirms that the post-lockdown boom will come to an end at Christmas, with prices beginning to decline heading into the New Year.

Based on analysis of purchase price data from 30,000 conveyancing quotes on the price comparison site for home movers between September and November, Reallymoving predicts that the average property price in England and Wales will peak at £352,239 in December, before falling to £343,312 by February 2021.

Rob Houghton, CEO of reallymoving, said: “Our prediction of a New Year change in fortunes for the housing market has been further strengthened by the latest data which clearly shows price growth entering a downward trend in January and accelerating in February.

“The mask is beginning to slip on the two-tier housing market of recent months, which has seen activity from equity-rich homeowners who are less affected by the pandemic, concealing problems at the lower end of the market where First Time Buyers have benefited little from the stamp duty holiday and faced considerable challenges securing higher loan to value mortgages.

“The kind of growth we’ve seen over the last few months was never sustainable. Despite positive vaccine news, which will certainly boost confidence that the end of the pandemic is now in sight, there are significant challenges for the housing market to overcome in the short term, including the end of both the stamp duty holiday and the furlough scheme on 31st March, which is likely to result in further downward movement in prices over the first half of next year.”