In its latest Housing Market Forecast, Hamptons International considers how and when the sale and rental markets will recover from the effects of the Covid crisis, with their predictions ranging out to 2023.

After a promising start to the year, the onset of Covid-19 resulted in the housing market coming to an abrupt halt. But following its reopening in May, the strength of the market’s recovery surpassed expectations. By early June, there were more people looking to move home than at the same time last year. And following the July announcement of a nine-month stamp duty holiday, buyer numbers were up by double digit percentages in every region, with the largest increases in London and the South.

The market has been buoyed by pent-up demand that not only grew as a result of lockdown, but could be traced back to Brexit uncertainty and the EU referendum in 2016. Movers in the market today have put lifestyle above economic uncertainty. Many of these are households who have built up equity in their homes, are less likely to have lost their job and have the security of a financial buffer.

The latest data for September shows that the housing market has remained buoyant, with the average home selling for 99.0% of its initial asking price – a record high. And it’s these late summer sales that will form Q4 completions which our house price forecasts are based on. We expect house prices in Great Britain to rise 2.0% in 2020, up from 0.9% in 2019. Wales (3.0%) followed by London (2.5%), Yorkshire & the Humber (2.5%) and the North West (2.5%) will see the strongest house price growth in 2020 (chart 1). 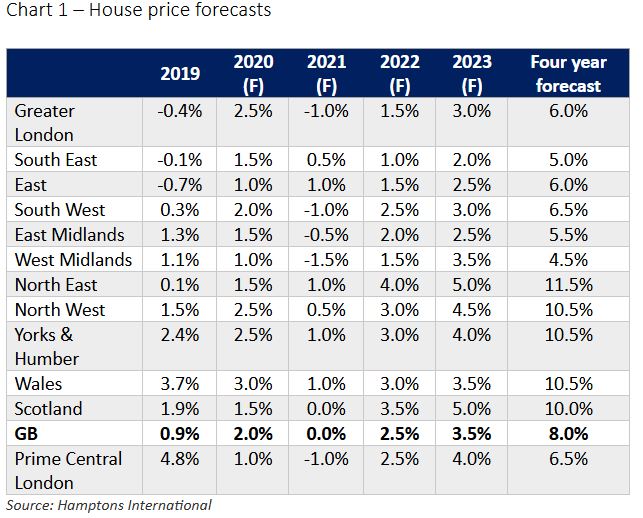 The economic fall-out from Covid-19 will disrupt the housing market next year, but prices are forecast to stabilise by the end of year

2021 will be challenging, with lots of uncertainties and economic deadlines ahead. Although the wind down of government support measures means that unemployment is likely to peak in H1 2021, the economy should have made up some lost ground. We also assume that a trade deal is agreed with the EU at the turn of the year and a vaccine becomes available in the first half of 2021.

Assuming the stamp duty holiday ends as planned in March too, Q2 is likely to be challenging and we could see small price falls. However, towards the end of the year the economy and housing market should stabilise. Providing the availability of mortgage finance returns to near pre-Covid levels, we expect house prices to remain flat in Great Britain in 2021, with small price falls in those regions likely to see the biggest job losses and where affordability barriers are already tight.

The West Midlands, the region that had the highest furlough take-up rate at the peak, is set to see the biggest price falls next year (-1.5%). We also expect small falls in London (-1.0%) and the East Midlands (-0.5%). Meanwhile the remaining six regions will see prices rise between 0.0% and 1.0% (chart 1).

2022 and 2023
The housing market will return to its longer-term growth path, with prices expected to rise by 2.5%

As the economy recovers, we expect the housing market to move back towards its long-term growth trajectory. House prices are likely to rise in line with household incomes and will be supported by low interest rates. As a result, we think prices in Great Britain will rise 2.5% in 2022 and 3.5% in 2023, with increases across all regions. This puts house price growth over the next four years at 8.0% across Great Britain (chart 1).

The greatest price growth will come from regions where affordability barriers are less of an issue, and typically from the regions where prices have lagged behind. We expect prices in the North East to rise 4.0% in 2022, followed by Scotland at 3.5%. Southern regions, where affordability remains tight, will see the weakest price growth in 2022 (chart 1).

Over the four-year period we expect the West Midlands to record the weakest house price growth, due to the effect of Covid-19 on the local economy, with prices expected to rise 4.5%. Meanwhile we forecast the North East to see the biggest price rises over the next four years, rising 11.5%. London will underperform the average growth rate in Great Britain, with prices forecast to rise 6.0% by 2023 (chart 1).

As the economy recovers transactions will rise gradually, surpassing the average of the last five-years by 2022

Sales completions ground to a halt during lockdown as buyers followed government advice to only move home if strictly necessary. The latest HMRC transaction figures show that completions in April were 57% down year-on-year. When the housing market reopened in May, most movers who had agreed a sale before lockdown continued with the purchase. Nevertheless, there were 25% fewer transactions in the first six months of 2020 compared with the same period of 2019.

Since then, sales have recovered strongly. There were more sales agreed in July and August than at the same time last year, which should turn into completions by the end of the year. We expect transactions in Great Britain to reach just over one million in 2020. This is 11% fewer than in 2019, but more than in any year between 2008 and 2012 (chart 2).

We expect this momentum to continue into Q1 2021, as the end of the stamp duty holiday approaches. But activity may weaken as job losses peak and the real economic impact of the pandemic begins to be felt. Despite this, we still expect there to be 1.1 million transactions in 2021, 8% more than in 2020, but still slightly below 2019 levels (chart 2).

Transactions should rise gradually in 2022 and 2023, exceeding the average of the past five years, as the economy returns to health. Assuming lenders reintroduce a wider range of high loan-to-value mortgages, more people will be able to buy their first home or move up the ladder to a larger property. However, two factors will put a cap on transaction numbers: muted sentiment among buy-to-let investors and the ending of Help to Buy. 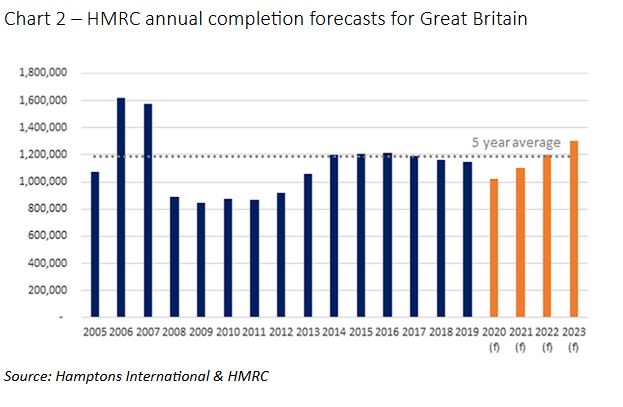 Rents to underperform house prices this year with -1.0% falls forecast in Great Britain

The rental sector has recovered more slowly from lockdown than the sales market. Tenant numbers are down on last year in eight of the nine English regions, with few signs of any pick-up. Low income workers, particularly renters, are more likely to have lost their job or had a reduction in their income than homeowners. This has led to a fall in rents, particularly in the South and London.

Rental growth will decelerate more sharply in London than anywhere else due to a combination of factors unique to the capital. Record numbers of short-let properties have been converted to long-term lets in response to the fall in tourism and the lower number of international students seeking accommodation. There is also less demand for corporate lets and an increase in the number of tenants leaving the capital. As a result we expect rents in London to fall -3.0% in 2020 and -2.0% in 2021, before bouncing back to 3.5% in 2022 and 4.0% in 2023 (chart 3).

“The housing market’s strong start to 2020 soon came to a halt with the rise of Covid-19. But after seven weeks of lockdown the market began to recover quickly. The market was buoyed by pent-up demand going back to 2016 as well as a rise in the number of households making lockdown-induced lifestyle changes, all topped off by a stamp duty holiday. We believe house prices are set to rise across Great Britain and will end 2020 having picked up from where they started at the beginning of the year.

“But the real challenges won’t be felt until 2021. The economic consequences from the Covid-19- induced recession will pull the housing market from its long-term growth trajectory. While some economic recovery should have taken place to cushion the withdrawal of government support, we still expect the housing market to slow next year.

“In line with a gradual economic recovery, we forecast house prices to rise again in 2022 and 2023. The housing market will fall back in line with its historical cycle, with Northern regions expected to see the greatest price growth, further closing the gap with those in the South.” 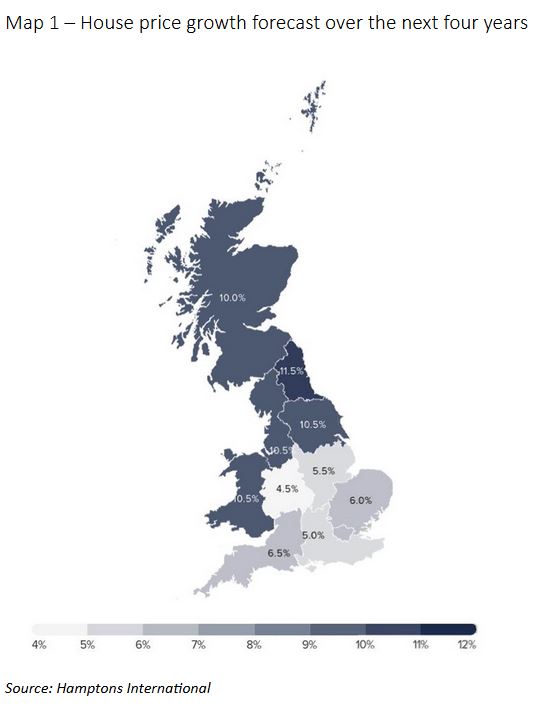