There was a 38% increase in the number of residential property sales agreed last week, when compared with the same period last year, and the signs are that the housing market is set for its busiest run up to Christmas for more than a decade, fresh data shows.

Demand for housing remains 34% higher year-on-year, despite a short dip after the recent lockdown announcement, according to fresh research from Zoopla.

The boost to demand and sales volumes has culminated in house price growth approaching an almost three-year high of 3.5%, up from 1.2% a year ago, with 2020 expected to end with house price inflation reaching 4%, the property portal predicts. 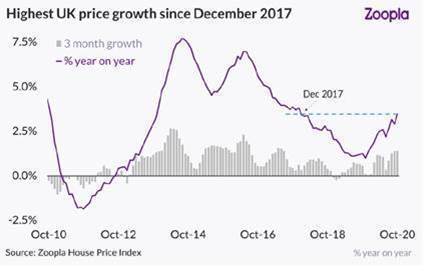 The scale of growth is explained in part by a shift in the mix of homes transacting, with more sales in wealthier demographics at higher prices.

Richard Donnell, director of research and insight at Zoopla, commented: “It has been a roller coaster year for the housing market which is ending on a strong note with demand and sales agreed still more than 30% higher than this time last year. House price growth has hit a three-year high and is set to increase further in the short term.

“The high volume of sales agreed this autumn will spill over as completed sales in 2021 and this will support the overall number of sales completed in 2021 at 1.1 million. It has been a remarkable turnaround and completed sales look set to fall just 6% short of last year despite a two-month closure of the market in England.” 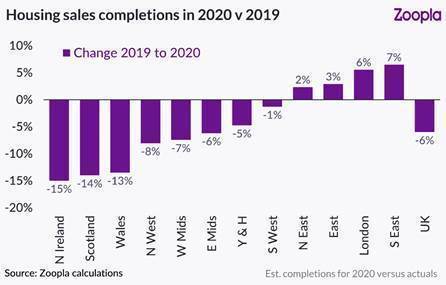 A regional breakdown of property sales completed is expected to show a fall of 6% in 2020, when compared with last year. This is an improvement on Zoopla’s original forecast of a 15% drop year-on-year.

Just four regions, the South East, London, East and North East, across the UK bucked the trend, reporting an annual increase in housing sales completions of between 2% to 7%.

The South East led the trend, registering an uptick in completions of 7%, followed closely by London at 6%. 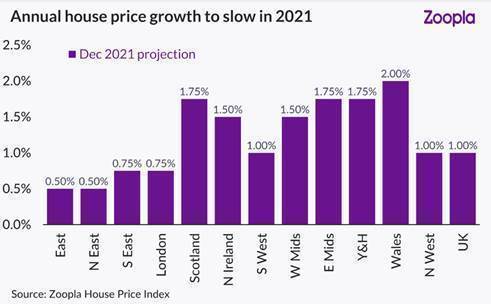 Looking ahead to 2021, the housing market is shaping up to be a year of distinct phases.

The first quarter looks set to register a seasonal uplift in demand, but Zoopla expects this to be short-lived and for demand to weaken thereafter.

Once the stamp duty holiday concludes at the end of March, Zoopla anticipate a slowdown in sales completions as the impetus to move amongst buyers motivated by stamp duty savings dissipates.

This will have a knock-on effect on transaction volumes in the second quarter of the year, which Zoopla expect to run 20-30% below normal transaction levels as stamp duty is reintroduced, before recovering slightly and running 10% below 2019 levels for the second half of the year.

Donnell added: “There are some challenges ahead as the country battles the impacts of the pandemic on the economy and day to day life. The impact on the housing market is less than in previous downturns as sales volumes have already fallen in recent years and affordability levels are far from over-stretched.

“We expect housing demand to slow further over 2021 and this will ease the upward pressure on prices which we expect to be 1% higher by December 2021. Lower sales volumes over the second half of 2021 and a growing scarcity of supply will offset weaker demand and support headline pricing levels.” 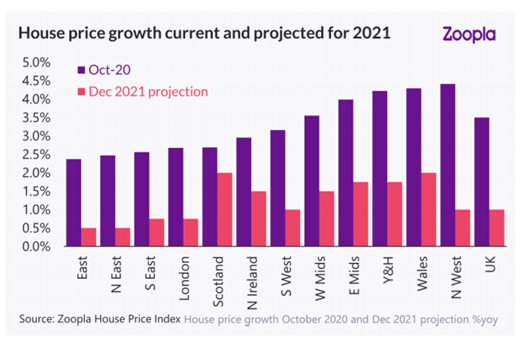