A floating house whose roof was constructed entirely from the ‘for sale’ boards of a single estate agent has been torn down by authorities.

Friends Max Bloom and Stephen Watt created a makeshift home on a stretch of Regent’s Canal at Angel in London.

Its roof was made up of the distinctive yellow and green boards of London estate agent Foxtons and the structure floated on empty beer kegs borrowed from nearby pubs.

Bloom and Watt were attempting to get the hut registered with local authorities but the local Canal and River Trust sent enforcement officers to remove it last week.

Bloom, who became homeless eight months ago, is now back on the streets.

A neighbouring boat dweller told the Evening Standard: “It’s a shame it was destroyed. No one knows if it’s a brilliant art statement to use Foxtons signs or if it’s just a light, waterproof material for the roof.” 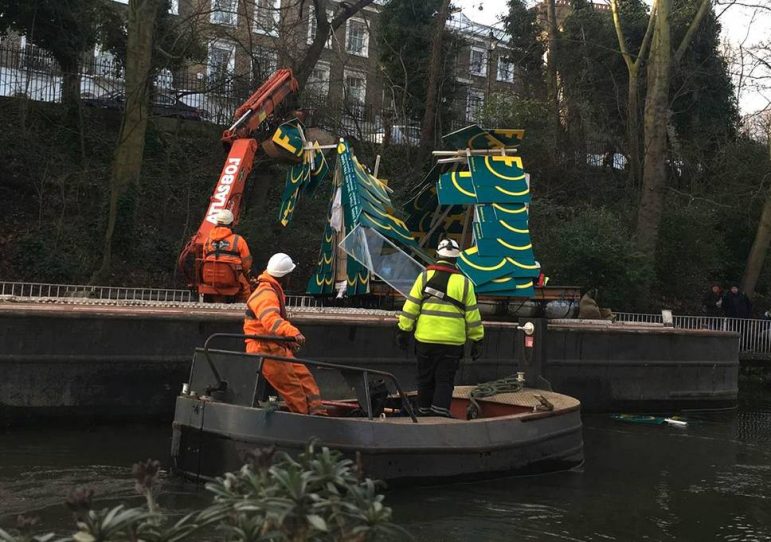 Foxtons said it did not know how the pair came by the boards they had used for the roof.

A spokesman said: “Foxtons always strives to ensure our boards are used in the correct manner.

“They are kept securely in a warehouse in London prior to being installed and are returned there immediately after being taken down – they are never stored in one of our front offices.

“Unfortunately we cannot always control what happens to the boards once they have been installed.

“It appears that in this instance they were used in a way that we didn’t intend, and while we would never condone illegal activity we do at least appreciate the enterprising way in which they were put to use in this instance.”

A spokesman for the Canal and River Trust said the raft had been unlicensed and at high risk of sinking or catching fire.