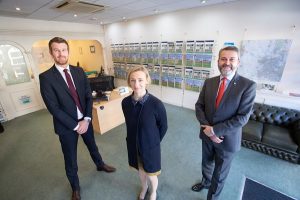 Berriman Eaton in the West Midlands has expanded with the opening of a new office in Worcestershire.

The estate agency, which also has offices in Bridgnorth, Tettenhall and Wombourne, says that it has seen sustained growth in property sales and a letting portfolio that has increased by a quarter to 400 properties under management in the last 12 months.

Berriman Eaton has also revamped its brand with a new corporate identity.

“Our £250,000 investment has been put in place to build on our strong position in the West Midlands and this has helped us sustain growth across all of our existing offices and especially in our venture in Worcestershire.”

He added: “The new brand has been two years in the making and I’m really pleased to say the change has been welcomed by all our customers and the property sector in general.

“In fact, one well-known local estate agent told us they that it was the best agency rebrand they had ever seen.”

Reflecting on the firm’s letting performance over the past 12 months, which has seen the number of properties under management increase 25% to 400 homes.

Andy Roberts, director and head of letting at Berriman Eaton, said: “Demand is outstripping supply at the moment, and this is driving up rental prices significantly in the West Midlands.

“We’ve seen a 25% increase in our portfolio in the last twelve months and can see this increasing again in 2023.”

Caroline Eaton, director of Berriman Eaton, added: “Our market share in traditional hotspots of Wolverhampton, Wombourne and Bridgnorth continues to grow, and we are delighted to see how well BE Worcestershire is progressing.

“Debbie Fellows and Julia Simonds have fitted into our business seamlessly and not only have they established their own office at Churchill & Blakedown Golf Club but have also hugely increased the level of ‘new build’ work across all our branches.”