A group calling themselves the Women’s Death Brigade protested outside Foxtons in Islington, north London, on Saturday.

One woman posed with a large fake hammer, making it look as though she was trying to smash into the deserted glass-fronted building.

They also left stickers on the building and handed out flyers which claimed to show injuries that a woman, named on the Class War website as Jane Nicholl, sustained during a clash in July.

Saturday’s protest, which seemed to be thinly attended, followed a July demo which resulted in three Foxtons estate agents at the branch losing their jobs.

They had allegedly been involved in a brawl with Class War protesters outside Boris Johnson’s home.

On Class War’s website, a statement claims: “On July 15 this year I was violently assaulted by a Foxtons Estate Agent who came with his colleagues to disrupt our demonstration outside Boris Johnson’s house. I suffered concussion and was hospitalised with five stitches to the back of my head and severe bruising.

“Although the attack is on video and shows the police watching me being pushed over and calmly ignoring this, the Crown Prosecution Service has decided to drop the case due to ‘lack of evidence’.

“Let’s go on the offensive! We are not victims!”

The Metropolitan Police have told the Daily Mail that after the July 15 protest, one man will appear at Highbury Corner Magistrates Court on October 25 charged with assaulting a police constable.

A second man is to appear on November 14 at the same court.

The case against a third man has been discontinued.

The Class War website reports Saturday’s demonstration, accusing Foxtons of condoning male violence, adding “ … it’s also important to remember that the housing which they [Foxtons] are involved in propelling out of control, is a gendered crisis”. 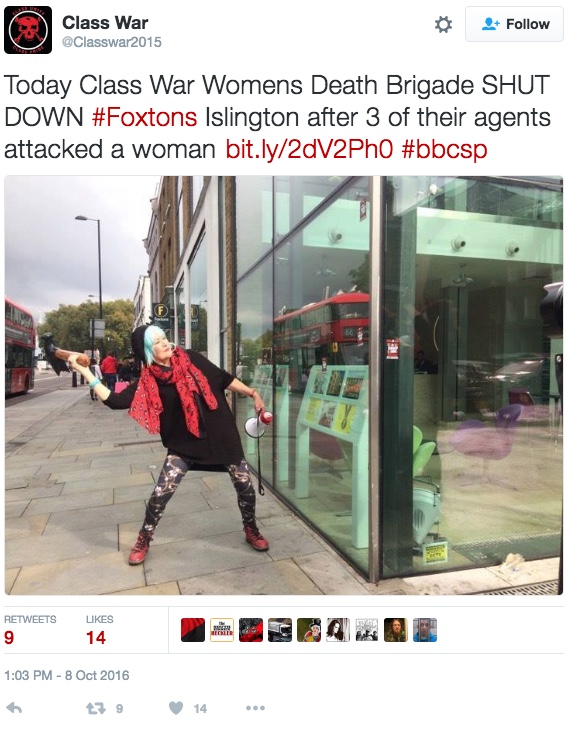