The chancellor is said to be considering a number of tax hikes, including capital gains, and that has led to a significant rise in investors exiting the housing market. 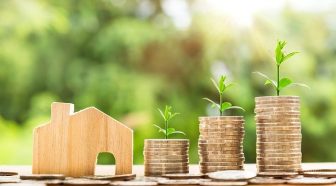 Speculation is growing that the chancellor Rishi Sunak will announce changes to capital gains tax rates in the Budget next week, as he looks to find the money required to cover the government’s unprecedented spending and borrowing during the pandemic.

It comes as no surprise that the chancellor is reviewing the structure of UK taxes, with a senior financial analyst yesterday warning that a hike looks inevitable.

“For a Treasury that is looking to pinch some pennies, CGT looks like low hanging fruit,” said Laith Khalaf, financial analyst at AJ Bell.

Rishi Sunak, who commissioned the review, is considering proposals by the Office of Tax Simplification (OTS), a Treasury-based body, to reform capital gains tax in the light of the economic and fiscal impact of the Covid-19 crisis.

The move has the potential to bring in an extra £14bn by reducing exemptions and doubling rates, according to the review.

“The OTS duly obliged and recommended that CGT rates be raised in line with Income Tax rates, and that the £12,300 annual allowance of tax-free gains be cut to somewhere in the region of £2,000 to £4,000.”

Since the government called for a review of capital gains tax last year, some investors are exiting the housing market, as the proportion of previously rented properties being listed for sale has risen.

The percentage of homes on the market that were previously for let has risen across all English regions, with 7.2% of all new sales inventory across the UK now previously rented, fresh data from Zoopla shows.

This trend is most prominent in London and the South East, with the proportion of previously rented properties now on the sales market standing at 13% and 8% respectively in these regions.

Some investors may be selling in order to beat changes to capital gains tax; or looking to take advantage of higher capital values; while others may be rationalising their portfolios due to changing rental market dynamics.

This goes some way to explain why the supply of property is rising in London, with a higher proportion – 13% – of new supply, made up of formerly rented property, now coming to the market, according to Gráinne Gilmore, head of research at Zoopla.

She commented: “One area of the market where there is more supply coming to the market is among landlords who are bringing their investment properties forward for sale.

“The share of homes listed for sale which were previously rented has risen in nearly every region during 2020, as landlords reassess their portfolios in light of current rental trends, or ahead of possible tax changes for investment property. While the homes for sale account for a very small proportion (less than 1%) of rented stock, it is a noticeable trend emerging in the market.” 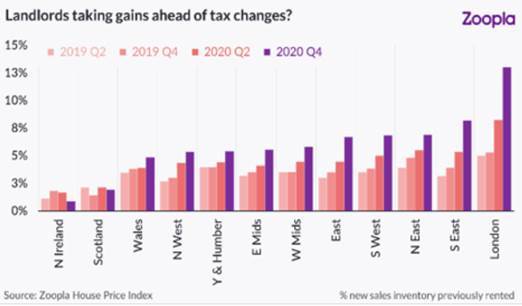