Buying agent and property commentator Henry Pryor has expressed his disgust on Twitter about the state in which a property had been left for his clients by the vendor over the weekend. He has also criticised the agents.

He posted pictures of the £1.6m London home he sourced for a young couple and their six-month-old baby.

Pryor also complained about the delay of more than eight hours between the agreed completion time of 9.30am on Friday and when the seller finally vacated the property.

He said: “As the seller was leaving under the sad circumstances of a divorce and it was in their gift to do so, my clients gave her a few hours’ grace. However, she crashed through the new agreement and was still packing up at 5.30pm leaving a bomb site behind her.”

Pryor said that, while his clients were ‘getting twitchy’ they had been fortunate enough to have access to a property round the corner where they were able to wait.

“Had they been sitting outside in a removals van for eight hours with a small baby, it would have been a totally different story,” he said.

The family ended up collecting up the keys their property the following afternoon – Saturday.

Pryor said that, having managed more than 1,200 property completions, it was first time he’d encountered a situation of this kind. He placed the blame largely with the seller’s estate agent whom he declined to name.

“Completion is a big part of their job,” he tweeted. “Handing over keys, checking the property, ensuring it is secure, checking that what’s there is what was agreed.”

James Mackenzie, head of Strutt & Parker’s country department, agreed. He told EYE: “If an estate agent is doing their job properly, they will make people aware of the logistics of vacating a property in plenty of time, as well as their moral responsibility to leave it in a decent, clean condition.”

He added: “Especially if you are moving in the same area, it’s likely kids will go to school together and it will come back to haunt you.”

But other Twitter users who had waded into the debate argued that completion matters were “down to the lawyers, rather than the agents”.

Natalie Bradley, solicitor at conveyancing firm Stephensons, said: “When you exchange contracts and agree a completion date and time, most people are able to meet those timescales – but it’s not uncommon for that to slip slightly. In this case, there is usually some leeway provided by both parties.”

Where the delays are too long, it could be feasible for a buyer to sue the seller for late completion and seek redress, she added.

“However, this would only amount to interest for each day the completion was delayed, so in reality it is probably not worth the costs of pursuing such a course of action.”

Bradley added that if the delay lasts for two weeks, the purchaser can usually seek to rescind the contract and request for their deposit plus interest to be returned.

Pryor added that buyers should find out the day and time the seller has booked removals and aim to avoid completing on a Friday as businesses can be closed over the weekend. 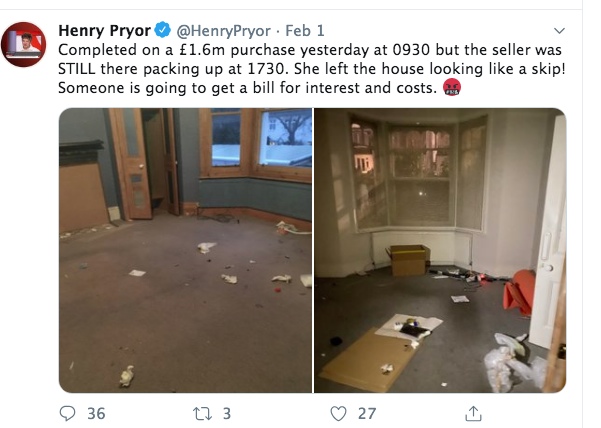