An agent expelled by both the tenancy deposit and redress schemes it belonged to, now appears to have shut its doors.

Carter Stones, in Ilford, Essex, is said to have not opened all last week, nor answered its phones. Our own attempts to contact it both at and before the weekend have failed.

The firm is due to be the subject of a slot on radio programme You and Yours today at 12.15pm.

Paul Shamplina, who is the ‘brand ambassador’ for mydeposits, will be taking part live in the programme. He has been instructed by landlords via his company Landlord Action.

Alleged victims have also been contacting EYE in recent days, complaining they are owed money and also saying that they have got nowhere with official authorities.

Meanwhile, a £5,000 fine levied by local Trading Standards because the agent does not offer redress has not been paid.

One person, a prospective tenant, told us he paid money upfront to Carter Stones – a £500 holding fee, £980 in advance rent and a tenancy deposit of £980. He was then told the property had been let to someone else, but his money was never refunded.

He complained to police and Action Fraud after their dealings with Carter Stones.

Police apparently rejected the case as a civil matter. There was no positive response from Action Report, the victim claimed.

The victim has also been in touch with local MP Mike Gapes, Trading Standards, and the Property Redress Scheme which expelled Carter Stones last September.

The PRS issued a ruling in favour of the prospective tenant last March.

It ordered Carter Stones to pay £1,500 compensation payment, plus refund the money taken, and apologise to the complainant.

In the PRS ruling, the complainant is said to have supplied information about a previous company, “that they maintain was the predecessor of the Member [ie, Carter Stones] and who it had been alleged had ripped prospective tenants off”.

A second alleged victim, a tenant, says he vacatged the property on December 18 as agreed, and is owed £2,284 as the rental deposit.  This was promised by March 1, but has never arrived.

In another case a landlord, told us they have been “swindled” out of £3,150 by the agent, the equivalent of two months’ rent, with their tenant unable to get his deposit back.

In a fourth complaint EYE has been told about, another landlord said she is owed a total of £2,690 – the amount after fee deductions from rent of £3,300 between July and October last year.

She has been notified by paperwork we have seen that the payment will be processed on March 17.

The notification came to her with the letterhead Carterstones Practical Living. However, the reference at the bottom of the notification stated “Carter Stones Limited”.

It was as Carter Stones that the business was expelled by both the Property Redress Scheme and mydeposits.

In a twist, it has emerged that the landlord is not responsible for making good this money, as the tenancy agreement was drawn up by Carter Stones, which named itself as the landlord.

The landlord and tenant have since drawn up their own AST agreement.

The landlord told us: “We have been complaining about this to Trading Standards and Action Fraud for at least six months and nothing was done. What are we supposed to do now?”

Eddie Hooker, head of mydeposits, very quickly came back to us on Friday afternoon.

He said that the tenant’s deposit will be refunded, and that this will be fast-tracked.

However, this still leaves the landlord out of pocket.

Redbridge Trading Standards told us that they “are aware of complaints made regarding the letting agency Carter Stone and investigations are ongoing. There have been a number of complaints about their letting agency activities, including those from landlords, tenants and the local member of Parliament on their behalf.

“We take formal actions against any letting agency that does not comply with the regulations and enforcement action will be taken against rogue agents.

“Since 1 October 2014, all letting agents must belong to one of three redress schemes operated by Ombudsman Services Property, Property Redress Scheme or the Property Ombudsman.

“Letting agents who do not comply face a civil penalty of up to £5,000. Redbridge Trading standards issued a £5,000 fixed penalty fine to Carter Stones in November 2016, which has not yet been paid. The council is in process of pursuing this and securing payment.

“Landlords and tenants should avoid unregistered agents and report them the Citizens Advice Consumer Helpline on 03454 04 05 06.”

The affair has raised the question of a possible loophole: how can letting agents continue to trade – and still handle the public’s money – if they no longer offer redress, a legal requirement? 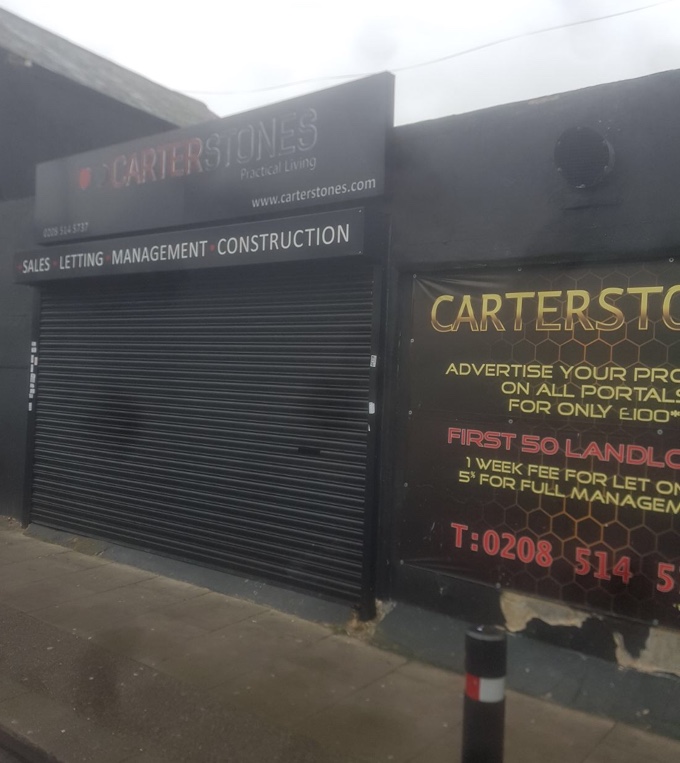