Zoopla sailed into the attack against OnTheMarket for a second successive day.

It accused OTM of apparently deliberately engaging in a campaign of misinformation about its own traffic and that to other sites.

OTM responded by accusing Zoopla of using “desperate smear tactics”. It also said it was taking “extremely seriously” the suggestion that it was deliberately misinforming agents – raising the possibility that the hostility between the two sites could go legal.

On Monday, it sent journalists information from Hitwise, claiming that OTM’s traffic in February averaged under 38,000 each day, compared with over 1.25m daily for Zoopla and 2.4m per day for Rightmove.

“The latest data from independent web audience monitoring firm comScore reveals that total ‘unique visitors’ to OnTheMarket (OTM) during February were only 439k, well below the figures claimed in recent communications.

“The number of visits (non-unique) to OTM in February averaged 38k per day according to comScore, which puts their data in line with that already reported by Hitwise and confirms that OTM is so far struggling to gain any real traction and market share with consumers.

“OTM appears to be deliberately engaging in a campaign of misinformation to its members and the market both about their own traffic figures and the volume of listings on competitive websites.

“The traffic numbers speak for themselves and Zoopla’s listing numbers have been available publicly on its website homepage for the past five years and show over 820k properties listed today.

“Lawrence Hall of ZPG said: ‘OTM continues to make unsubstantiated and misleading claims about its traffic but its members are easily able to track their enquiries and performance and we urge them to do so.

“Despite recent attempts to rubbish independent data sources like Hitwise and comScore, these are widely recognised by advertisers worldwide as the most reliable indicators of audience.

“We believe that OTM will need to come clean to its members about its ability to realistically challenge and replace the exposure of the leading portals that it has asked them to give up.

“We are not surprised by the traffic figures from comScore or Hitwise given that the OTM marketing campaign to date appears to be heavily tilted towards the niche, top-end of the market with ads in national broadsheets and magazines like Country Life.

“It is quite hard to see how, as a mutual, these types of activities and spend benefit the majority of its members.”

“The figures being quoted by Zoopla Property Group with regard to traffic levels at OnTheMarket.com are entirely inaccurate.

“We stand by every figure we have previously stated and there is no question that less than six weeks after our launch, on March 6 and 7, we passed the mark of two million unique visitors to the website. We regard the allegation that we are ‘deliberately engaging in a campaign of misinformation’ to our members and the market extremely seriously.

“These latest inaccurate traffic figures are simply the latest instalment of Zoopla’s desperate smear campaign against OnTheMarket.com. Zoopla is trying to intimidate agents who have chosen to remove all of their properties and their corresponding advertising expenditure from Zoopla to list with OnTheMarket.com because so far around 90% of our members have left them.

“Zoopla has previously claimed OnTheMarket.com would not never get off the ground, then it presumed it would not raise enough money, nor launch on time.

“They suggested the website would not be good enough and agents would not respect our one other portal rule but we have proved them wrong on all counts and we remain confident in becoming the number two portal by January 2016 because our membership base and our traffic levels are increasing.

“They also claim we are targeting the high-end market but our multi-million pound advertising campaign has been widespread across TV, print and pay-per-click.

“With every smear tactic used, it is clear just how out of touch Zoopla has become with the commitment of our 4,800-plus member agents to create a superior market-leading, mutually-run, property portal.

“Ultimately, the property-seeking public and the agents themselves will decide over time which portals deliver the most value.”

Below, the Hitwise statistics issued by Zoopla 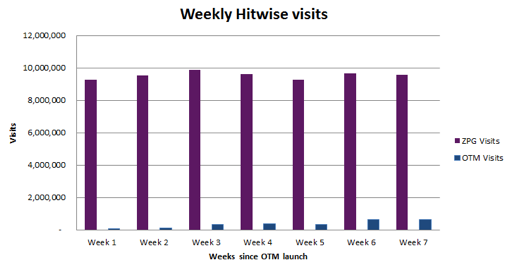