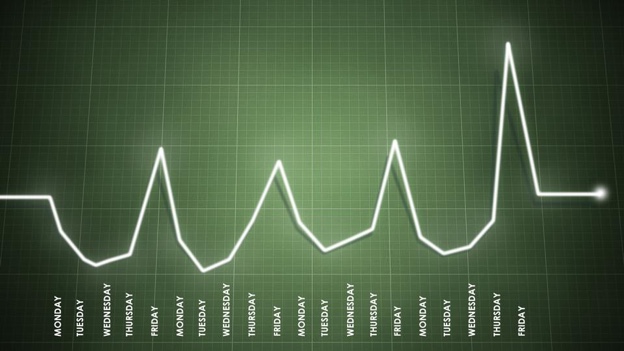 It would make sense if …

You were watching a scene from Casualty, and then you might expect to see something similar to this graph coming directly from a heart rate monitor.

But if you were a conveyancer you would recognise the graph as being something completely different.

The graph actually shows the days of the week when myhomemove completed on transactions in February this year. As you can see, we have a surge of completions on a Friday.

February was an unusual month as it started on a Monday, and exactly four weeks later it finished on a Friday. Not only that, but slap-bang in the middle was Friday the 13th (I did say it was unusual).

The graph shows in a heartbeat just how consistent the trend is, and it goes without saying that for conveyancers, Fridays are the busiest days of the month, and that the last Friday of the month is the busiest Friday. So why does this happen?

One of our clients actually said to one of our conveyancers that you had to complete on a Friday because “it is the law”. Well I don’t know where in the statute books that can be found, but there are times when it seems to be the case.

Often the reason for completing on a Friday is so that people have the weekend to move in, and the client does not want to take any time off work. Given that people move home every 5-10 years, this makes the physical move of a family’s possessions a race against time as they try to move their accumulated possessions in the space of two days.

Understandably it is also common for clients to schedule completion for the last Friday of the month so that their first mortgage repayment can coincide with their monthly salary payment.

You might think that this is all understandable and makes good sense, but it overlooks the unintended consequences.

One of these, and you may remember, was on Friday 17th October 2014 when the BACS system failed for nearly ten hours. On average, £227bn is transacted through the system each day – so we can only imagine how much money was scheduled to be moved on that particular Friday for salaries as well as completions. This failure put at risk many thousands of home moves – and I guess it is something we would all like to avoid going forward.

Another consequence is the sheer pressure that is placed on removal and van hire companies (as well as conveyancers). Imagine looking out at your depot car park on a Tuesday and seeing idle vehicles, knowing that on Friday it will be completely empty. Someone I know has tried to run a fleet of six removal vans and found it to be the hardest thing he has ever done.

Given that the majority of transactions take place on a Friday, I doubt that agents could manage the call volumes that this creates without the help of Moneypenny, or their own overspill facility such as that of Foxtons.

At myhomemove we are trying our best to sow the seeds of completing on alternative days in order to avoid the potential traps that lie ahead. It would be great if agents joined in.

There are other reasons for trying to take the pressure off Fridays. The table below shows the % of completions that take place within a particular time frame following the exchange of contracts:

These results have been virtually identical for the last five years, so what are they telling us? Firstly, it is worth saying that when I started working as an agent many years ago, the period between exchange and completion was a standard 28 days, but now less than one in ten take place in this relaxed and much less stressful timeframe (after all, many would prefer 28 days’ notice for their moving day rather than three).

Some 40% complete within three days, which means that many people will exchange on a Wednesday and move home on the following Friday.

Nearly two-thirds of people move within a week of exchange, and 80% will move within three weeks.

And let’s not forget that one in four exchange and complete on the same day, which leads me to comment on another thing.

Since most agents target exchanges, most conveyancers target completions, and most target periods seem to end on Fridays, everything focuses on the same day. That same day for many could be the end of a week, a month, a quarter, a half year and for some, even a financial year.

Logic suggests there are some simple things that agents could do to help, and it would make sense if:

At myhomemove we shall be working even harder with our clients to promote a workable timescale, and suggest a day other than a Friday for completion.

Agents could start influencing this even earlier by making it part of the final negotiation and including alternative dates for completion on their sales memoranda. Between us we can make the final days of a transaction much less stressful for our mutual clients.

By the way, it seems that fewer Triskaidekaphobians are moving home now, as Friday the 13th doesn’t seem to have the effect it used to!