Writing to OTM’s member agents, he said: “We have already disrupted the duopoly of Rightmove and Zoopla and believe we are reaching a crunch point for agents.”

He said: “It is no surprise that the number of agents listing with Rightmove has started to decline for the first time: down 298 offices year-on-year, with the greatest reduction – 257 offices – in the second half of 2018.”

Springett said that last year, Rightmove’s results showed it had hiked average revenue per advertiser by a further £83 and broken through the £1,000 per month barrier for the first time.

However, he said that for the third year in a row, Rightmove generated fewer leads for its customers – 171 on average per month last year.

He said that Rightmove also reported a further 10% decline in leads this January, which it attributed to “the fall in property transactions as a result of a slightly cooler housing market”.

However, Springett said: “Although NAEA Propertymark is reporting an overall downturn in buyer enquiries in January, we believe that the fall in Rightmove’s lead generation may also result from the substantial growth in leads delivered by OTM.”

He said OTM has increased its lead generation sevenfold since its admission to the stock market in February last year.

Springett’s letter goes on to say that OTM undercuts Rightmove, with fees typically a quarter of the price.

His letter ends by asking agents for their continuing support, including using the New and Exclusive feature by which properties are advertised on OTM 48 hours before being listed elsewhere.

Rightmove has rejected criticisms about volumes of leads, saying that it deliberately withdrew a tool in 2016 that until then let home hunters send a single enquiry to a number of agents in one go. Agents had complained that the leads were poor quality. The leads agents have received since are, says Rightmove, better quality and more relevant as they are about a specific property listing.

Separately, yesterday, a report from market analyst Robin Savage, of investment bank Zeus Capital, claims that at a briefing, Rightmove told analysts: “Cost per lead is the wrong way to look at Rightmove.”

Zeus Capital, which advises OTM, says its own view is: “Cost of customer acquisition (eg, cost per lead) is vital for most businesses. Estate agency is no exception.”

Rightmove has said in guidance for this year that it is looking at a 10% rise in revenue and a £5m rise in costs, with operating margin remaining at around 76%, according to the Zeus Capital report, which predicts that OTM will have 17,300 branches listing in three years’ time.

It said that concerns over lower agency numbers were over-done, and that the risk posed by hybrid agents was receding.

In yet another report also out yesterday, analyst Mike DelPrete said that overall revenue at Rightmove grew last year at the lowest rate in Rightmove’s history.

He said that this reflected “the growing difficulty the business has in charging its customers more money for the same service”.

Below, graphic from Mike DelPrete: 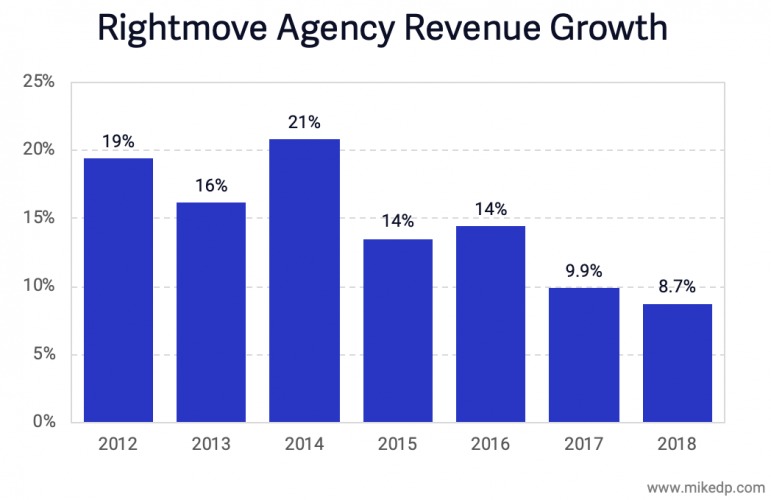