The value of the UK’s housing stock hit a record high in 2018, with much of the property wealth concentrated among the over-50s, research shows.

Owner occupiers without mortgages hold the greatest share of equity, though, with their homes worth a total of £2.58 trillion, up 3.3% year-on-year, while the value of mortgaged owner-occupied properties grew just 0.6% to £2.25 trillion, with £1.15 trillion coming from housing equity.

The research found that of the total £3.8 trillion in home owner equity, the over-65s own 43.5%, the highest proportion ever. 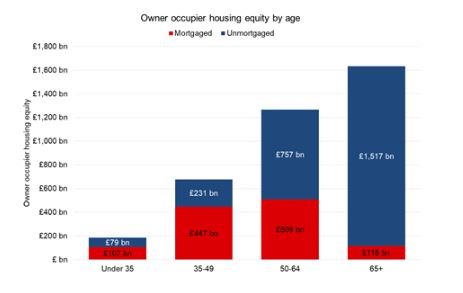 The increases in property value are also no longer coming from London, where values fell for the first time in a decade by 1.5% last year, although it still accounts for almost a quarter of UK housing value.

Across the UK as a whole, price appreciation added £138bn, or 72% of total gains, equivalent to growth of £4,800 per home. The balance of the uplift came from new housing development, which made its highest ever contribution to total gains at 28%. 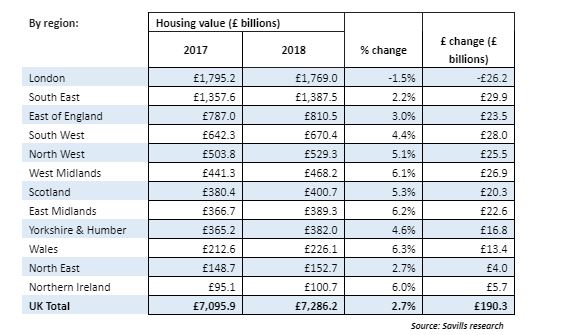 Lawrence Bowles, residential research analyst at Savills, said: “Our analysis demonstrates the scale of the housing market and underlines the importance of housing to the economies of London and the UK as a whole, both as an asset class and store of private wealth.

“Once again, we see that wealth concentrated in ever fewer, older hands, to the extent that the UK’s over-50s hold a quarter of all UK home owner equity, while the over-65s in London and the south of England alone account for over three-quarters of the total.

“At the same time, as affordability becomes more stretched, younger households are having to put off buying their first home until later in life.

“It’s great that we’re seeing more housing delivery, but development will have to make up a much higher proportion of new housing value if we are to come anywhere near building the homes this country needs.”