With the best will in the world, we cannot cover all of our readers’ fantastic attempts at raising money for causes close to their hearts. There are simply too many.

However, and please forgive the very many we have to leave out, we would like to congratulate two.

First up are the staff of Spicerhaart whose own charity Magic Moments, once again this year has enabled children from hospices across the UK to enjoy another magical encounter with Disney’s famous characters.

A total of 228 people have in the last couple of months enjoyed the trip of a lifetime to Disneyland Paris – including 48 families whose children have life-limiting illnesses or have been bereaved.

Around £150,000 has been raised by Spicerhaart this year through a wide variety of charity activities – including an epic 254-mile bike ride from Cardiff to Colchester, raffles, dragon boat racing, quiz and race nights – and even a version of Come Dine with Me.

Jonathan Martin, chairman of the trustees for Magic Moments, said: “As ever, it has been an emotional and exhilarating treat for all the families involved. People were crying with emotion when they were told they had been chosen to go on the trip.

“What’s absolutely great is that we had a record-breaking year of fundraising, which meant we could take more families than ever on Eurostar for the four days of festivities at the Magic Kingdom.”

The charity was set up by Spicerhaart in 1998 by Alick and Val Smith, parents of Spicerhaart chief executive Paul Smith, and has raised well over £1m over the years.

Smith said: “As ever, I am extremely grateful to all those who have raised money for us throughout the year, including staff, their families, suppliers and others associated with Spicerhaart.

“We pride ourselves on being a family-oriented business and our team love to get behind these events, planning crazy fund-raising activities throughout the year for this special cause.”

The picture says it all – just look at the expression of this child, with her mum and a member of Spicerhaart staff included in this magical photo. 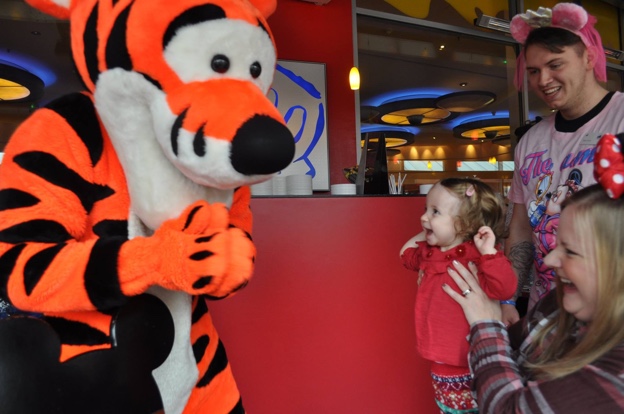 Meanwhile, staff at Leaders estate agents have raised £50,000 this year for a hospice charity. Earlier this month they took part in a variety of festive-themed fundraising events to hit their target for Together for Short Lives.

From raffles, cake sales and fancy dress to pop-up coffee shops and cycling in Santa suits – Leaders’ staff threw themselves into raising as much money as possible for their Charity of the Year at Festive Friday events across the country.

Together for Short Lives is the UK’s leading charity for children and young people in the UK who are expected to have short lives. The charity supports all the professionals, children’s palliative care services and children’s hospices that deliver lifeline care to children and families across the UK.

Leaders has partnered with Together for Short Lives since 2015; each Leaders branch is connected to its nearest children’s hospice so staff and customers can support seriously ill children and their families locally.

Some 49,000 children and young people are living in the UK with health conditions that are life-shortening or life-threatening. Together for Short Lives is there for every one of these children and their families. Together with the 54 children’s hospice services across the UK, they provide care and support, helping the children have as fulfilling lives as possible and the very best care at the end of life.

Allison Thompson, Leaders’ managing director, said: “I would like to say a huge thank you to our staff, customers, business contacts and the general public who have shown such fantastic support to our fundraising efforts.

“Festive Friday was our final charity event of the year and I am delighted to confirm that, as a result of the generous response we received, we have managed to reach our 2016 fundraising target of £50,000 for this fantastic charity.”

One of the most touching stories came from the Leaders branch in Poole, Dorset. Here, staff came to the rescue of a local charity shop for a hospice, whose entire day’s takings were stolen – £600 plus £112 saved towards a Christmas meal for volunteers.

The local Leaders replaced all the money stolen, with branch manager Tony Wilson saying it was a cause close to its hearts.

Well done also to estate agents in Plymouth who gave food and cooked a Christmas lunch for 70 homeless people in the city.

EYE warmly congratulates all our readers who have done so much for so many good causes this year.