The paradox at the heart of UK house prices has been starkly highlighted in the latest housing affordability figures released by the ONS (Office for National Statistics). Arguably it might be more accurate to term them the ‘unaffordability figures’from the perspective of those not yet on the housing ladder.

In the financial year ending 31 March 2021, the average home sold in England cost the equivalent of 8.7 times the average annual disposable household income.

Before Margaret Thatcher let the banks and lending institutions off the leash in 1986 – when she pushed through de-regulation – the ‘normal’ income multiplier used by mortgage lenders was around 3 times the annual salary of a principal earner (usually the husband in those days) plus half the salary of the secondary earner (usually the wife).

It had been this way for most the post-war years and the result was to hold house prices – and affordability – largely in check. Raging house price inflation that adversely affected afforability did occur periodically but they spiked, then subsided.

Post -Thatcher, income multiples for mortgage lending climbed. A six-times salary multiplier was not unheard of. An average affordabilty ratio was aroind 4x or 5x in the post war years, but from about 1996 the ratio began an inexorable climb, dropping briefly during the 2008 financial crisis before heading upwards again to reach today’s high figures.

Add in the inflationary effects of years low interest rates, of cheap buy-to-let mortgages; help to buy schemes; SDLT ‘holiday’; a decimation of social housing, an increasing population and a failure to deliver anything near the quantity of required new-build properties and it is not hard to see why house prices have spiralled and housing affordability today is at such an extraordinarily unaffordable level.

The historic figures (just look at the ratios in the 19th century!) show in this graph and in modern times the 8x figure has only been broached once before – in 2007/8 at the start of the financial crisis. 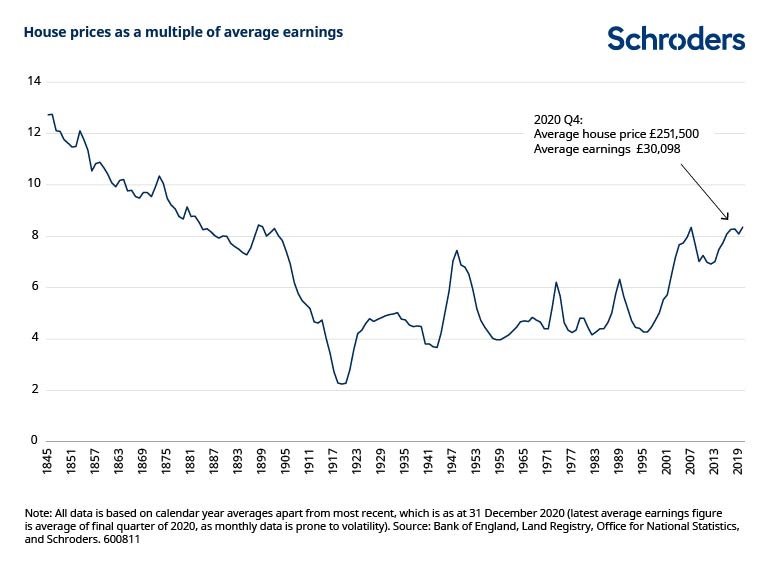 The ultra-low interest rates that have been the norm since around 2009 have been the foundation on which the worsening affordability index of recent times could largely be ignored by so many people. Cheap money and a low cost of living have led the property market down a precarious road and we now face a reversal of those benign conditions.

The change is to these conditions is just starting to be painfully felt in people’s wallets when they go to the shops, consume energy in the home, or fill up their car with fuel. It’s bad now and it will get worse before it (hopefully) gets better.

Yet any sign of a cooling market or drop in house prices is greeted by the popular media as something akin to a catastrophe of epic proportions.

The paradox and absurdity of our attitude to house prices and affordability is that on the one hand we rejoice that the asset value is increasing but on the other we bemoan the cost of obtaining the asset and  worry how our kids will ever be able to afford to purchase. Given today’s figures that prospect becomes ever more distant for young people.

We cannot have it both ways – though many seem happy enough to try, and to spend a large proportion of their incomes and savings in doing so.

Industry reaction to the ONS data.

“The Government has a great deal to answer for when it comes to the plight of today’s homebuyer and the blame can’t be solely placed at the door of one mop headed buffoon.

“For years, they’ve insisted on fuelling buyer demand while failing to address the severe reality of the housing crisis by actually building more homes and this has pushed house prices to record highs.

“As a result, the initial cost of a mortgage deposit has also spiralled and now acts as a huge financial barrier, preventing many from realising their dream of homeownership.”

Timothy Douglas, Head of Policy and Campaigns at Propertymark:

“The sales market has so far continued to remain buoyant during turbulent times with homes selling extremely quickly, but with further potential interest rate rises on the cards and the cost of living crisis taking hold of many people’s finances, latest data on housing affordability paints a concerning picture.

“With 2021 affordability ratios of household income and median house prices having worsened to already worrying levels, we know that this year, this disproportion is only set to increase.

“The current availability pressures within the market are a key factor to rising house prices but this is expected to start to slow at the end of this year. However, this will not be enough to level out the imbalance in supply and demand and current efforts being made are simply not going to deliver the right type of houses in the right places that we need on the ground to cope with demand.”

“The cost of homeownership is severely out of kilter with the reality facing many homebuyers when it comes to the money they earn, the amount they are able to save and the sums required to purchase a home.

“This has caused many have borrowed beyond their means while mortgage rates have remained favourable, simply to get a foot on the ladder. But with this cost of borrowing now starting to climb, we can expect to see those that have over committed find themselves in financial turmoil as they struggle to cover this increased cost on a below par level of income.”

“Affordability has almost become an anachronism. In the capital, the affordability crisis is beyond extreme.

“Insatiable demand from an ever-growing population, coupled with a limited supply of housing and a slowing production line of new build development will see a continued upward path of house prices.

“Factor in low wage growth, rising rates and inflation and the outlook becomes even more bleak.”