The government has reiterated its commitment to end rough sleeping for good through a joined-up approach with local partners to treating the underlying causes. 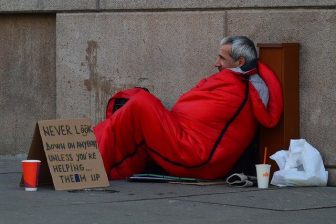 Government, charities and councils say they will work more closely together to help rough sleepers rebuild lives away from the streets.

Speaking with council and charity leaders yesterday, housing secretary Robert Jenrick set out government plans to build on the ‘Everyone In’ programme through a renewed focus on cross-agency cooperation involving local NHS trusts, Public Health England and councils to tackle the complex root causes of rough sleeping.

Joined-up support services, bringing together central government, councils, charities and welfare groups, will work side-by-side to tackle the underlying issues of rough sleeping, such as healthcare and substance misuse.

This commitment will build on the local partnerships that were developed during the pandemic – providing rough sleepers with a route off the street for good.

Jenrick said: “At the beginning of the pandemic we took swift and decisive action to bring rough sleepers in from the streets and settled into longer-term accommodation in record numbers. The results are clear and a huge credit to all involved.

“We must ensure we build on this progress as we recover from the pandemic and continue our tight-knit work with partners across the sector to offer all rough sleepers a chance to sustain a life off the streets.”

During the pandemic, the government worked with partners in local government and charities to support rough sleepers to keep them off the streets during a period of national emergency.

Yesterday, the housing secretary and the minister for Rough Sleeping, Eddie Hughes, addressed council and charity leaders, praising them for their work since the pandemic began and asking them to continue to work together to cement the achievements of Everyone In, which the government says has supported more than 37,000 vulnerable people over the past 15 months.

Councils have also been asked to refresh local plans to end rough sleeping and to agree operational targets for reducing rough sleeping in their area this year.

Hughes commented: “We pay tribute to the tireless efforts of council staff and community groups who, backed by unprecedented government funding, have helped thousands of vulnerable people over the course of the pandemic.

“Going forward, it is vital that rough sleeping and health services continue to work together to ensure the necessary support is there when people need it.

“Working together we will continue to transform the lives of people sleeping rough on our streets.”

Councils will also be asked to exhaust all options within the law to support rough sleepers not eligible for statutory homelessness assistance due to their immigration status.

The government believes that the Rough Sleeping Support Service could play a crucial role in this, which is why the Home Office will shortly be reviewing its future operation.

The government’s Everyone In initiative has so far led to more 26,000 moving on to longer-term accommodation.