Shelter has singled out one agency firm, which it names in an email to its supporters, asking them to telephone it and read out a two-minute script in protest at its alleged policy on tenant selection.

The firm has totally denied the claim.

Shelter is accusing major London firm ludlowthomspon of an apparent ban on letting properties to tenants on housing benefit.

Shelter’s email to supporters went out this week, despite ludlowthompson writing to Shelter last month firmly denying any discrimination policy.

In that letter Gemma Heaton, head of property services, says she can confirm that “ludlowthompson do not discriminate against renters who claim housing benefit. Indeed we currently have a number of benefit claimants [as tenants].

“All types of income, including benefits, are taken into consideration when assessing a tenant as part of the referencing criteria and this information will be used in conjunction with other references obtained.

“That said, in light of your comments and perception, we will take the opportunity to reiterate this message to staff.”

Yesterday ludlowthompson told EYE that all its staff have now undergone thorough retraining in order to reiterate company policy. It apologised that it did not effectively communicate this policy to all staff.

The firm also pointed out that the Government has recognised that there is an issue with some buy-to-let mortgage and insurance providers not allowing lettings to tenants where the income supporting rent is based on benefits.

Ludlowthompson was not included on a list of agents issued by Shelter last month when it set out to ‘name and shame’ those it believed were not accepting benefits tenants.

However, ludlowthompson does appear prominently on the Shelter site in another section.

This says: “We believe that Ludlow Thompson, the high street letting agent, is banning people on housing benefit from the homes it lets.”

It continues: “Ludlow Thompson has told us that this isn’t company policy, but our investigation suggests prejudice is widespread.

“It is not the only culprit – though we believe it to be one of the worst offenders.

“Ludlow Thompson will only stop this unacceptable behaviour if enough of us put pressure on it to change. Take a stand for renters – contact Ludlow Thompson to ask how it will stamp out housing benefit discrimination.”

A spokesperson for Shelter told EYE that ludlowthompson is so far the only agent to be targeted. However, she did not rule out that , urging them to call other agents could also find themselves being named in similar emails to Shelter supporters.

She said that while ludlowthompson had not been named in the press release about agents turning away benefits tenants, a second piece of research had apparently revealed that this is the firm’s alleged practice.

She said that there was already feedback coming in from Shelter’s supporters who have made calls to ludlowthompson.

The agents that were named after a mystery shopping exercise of 149 offices in six chains were: Bridgfords, Dexters, Fox & Sons, haart, Hunters and Your Move.

The email to Shelter’s supporters is below. The name of the recipient who contacted EYE with his concerns has been redacted, but he said he was alarmed by Shelter’s ‘guerilla’ tactics and appalled by the public naming of one agency. 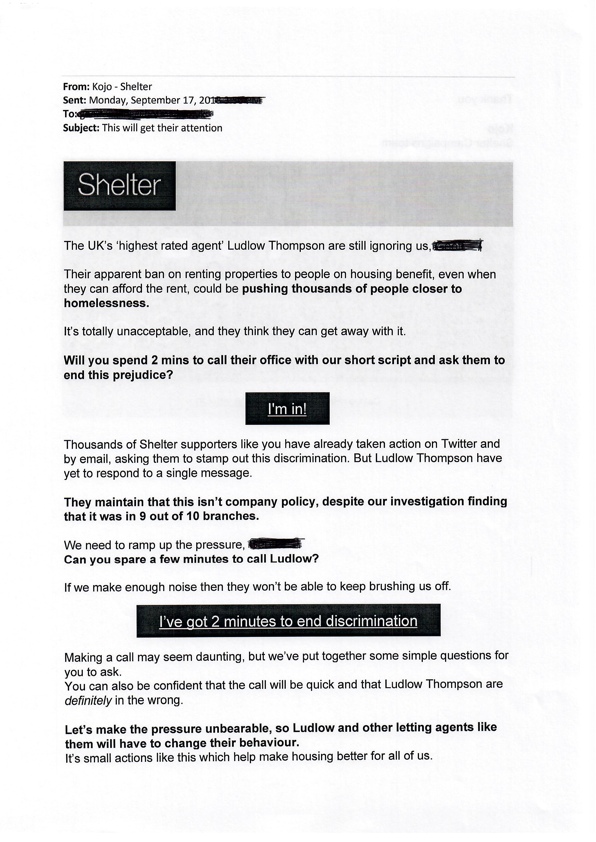