Rightmove has defended increasing the number of agents to whom it sells Local Valuation alerts from four to five.

An agent in one of the affected areas told EYE they only discovered this by chance, and claimed that Rightmove had raised the number without any notice to the agents already subscribing to the product.

The agent, who has asked not to be named but operates in the Greater London region, said: “The cost of these alerts varies according to postcode but are the most expensive additional products that Rightmove offers.

“By default the four subscribed/paying agents are selected when a vendor requests a valuation, with them having the chance to de-select any agents as they wish before submitting the request.

“As most vendors typically have three agents around to value their homes, agents can expect on average to be selected for 75% of valuation requests.”

The agent said that by increasing the number of slots from four to five, the average conversion rate will effectively be cut from 75% to 60%.

The agent said: “What Rightmove is doing is diluting the product without a) informing agents, and b) without any guarantee that the number of quality leads that they generate for agents via this product will increase.

“I suspect that they need to make more products available so that they can push their new packages which are substantially based on agents increasing spend on additional products.

“We have analysed our 2018 leads versus 2017 leads and the number of converted leads actually reduced during this period.”

However, a spokesperson for Rightmove said: “We took the decision to introduce a fifth slot for our Local Valuation product in order to meet demand from agents.

“The Local Valuation product offers agents a potential instruction opportunity from potential sellers and we had a waiting list of thousands of agents wanting to purchase slots in areas that were sold out.

“We made a number of updates to the product and carried out extensive testing throughout 2018 to ensure we could make it available to as many of these customers as possible, while still providing the same performance for those agents who had already purchased it.”

Below, five local agents now appear in EYE’s area (a Reading postcode) when a householder makes a valuation request 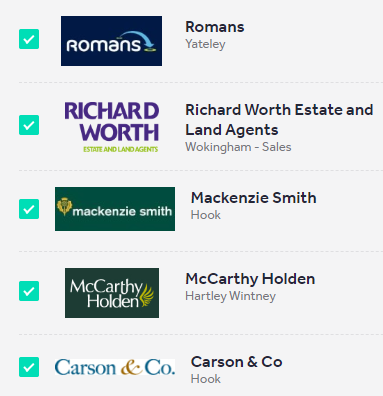