Train drivers are on track to afford a greater proportion of homes in six of the UK’s major cities than other public service professions, research claims.

Removals comparison website Reallymoving.com looked at the latest the latest ONS earnings data for professions such as train drivers, teachers and police officers and compared it to the average Land Registry house prices in London, Birmingham, Manchester, Cardiff, Glasgow and Belfast.

The site then assumes people have a deposit equal to six months’ gross salary and a mortgage of 4.5 times earnings. 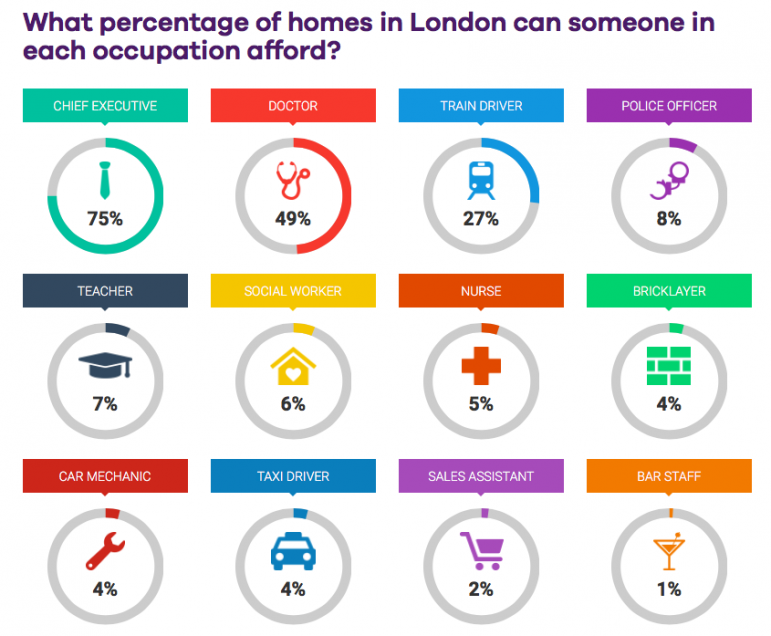 The situation has worsened over the last two years, according to the analysis. In 2016, teachers could afford 13% of homes and police officers 14%.

It is even worse for lower earners, Reallymoving.com says. Bar staff can afford only 1% of the capital’s homes, sales assistants 2% and taxi drivers 4%.

The UK’s second city, Birmingham, also follows London as the second most unaffordable city when comparing average house prices with typical earnings. Only 2% of the city’s homes are within reach of bar staff and just 4% are affordable to sales assistants working in Birmingham, while cabbies and car mechanics could consider buying just a fifth of the city’s homes.

Glasgow is the most affordable city in the UK for low earners who wish to buy their own home, according to the data.

Bar staff in Glasgow, earning on average £14,047, are able to afford 5% of all homes, taxi drivers 42% and car mechanics 46%. It also offers plenty of choice to middle earners, with nurses able to afford 52% of homes, teachers 65% and train drivers 82%, while chief executives, earning on average £86,758 per year, have the choice of 93% of the city’s housing stock, the research claims.

Chief executives fare the best across the UK, scoring 88% or more in every city other than London, where they can still afford to buy 75% of homes. Doctors, another highly paid profession, also scored more than 85% in every city apart from London, where even they, earning on average £86,785 per annum, can only afford 49% of homes.

Sadly there was no data available for estate agents or journalists.

Rob Houghton, chief executive of Reallymoving.com, said: “Becoming a train driver may not be a profession many people consider, but in fact it is surprisingly well paid and offers a great chance of getting on the housing ladder, even in London, where train drivers can afford over a quarter of homes.

“Sadly, police officers and teachers now find themselves almost entirely priced out of the capital, despite the fact that they provide some of the city’s most essential services. They do, however, have a very good chance of securing a home in the regional city of their choice.

“This research shows that, despite falling prices in London, the affordability gap continues to grow and is likely to do so until wages begin to show sustained increases alongside continued negative house price growth.

“For those seeking the dream of home ownership and a better quality of life, regional cities such as Glasgow and Manchester offer fantastic prospects and the opportunity to buy a suitable home within budget.

“I expect to see the current outward migration from the capital to regional cities increase over the short term, as wage stagnation puts home ownership even further out of reach for all but the highest earners.” 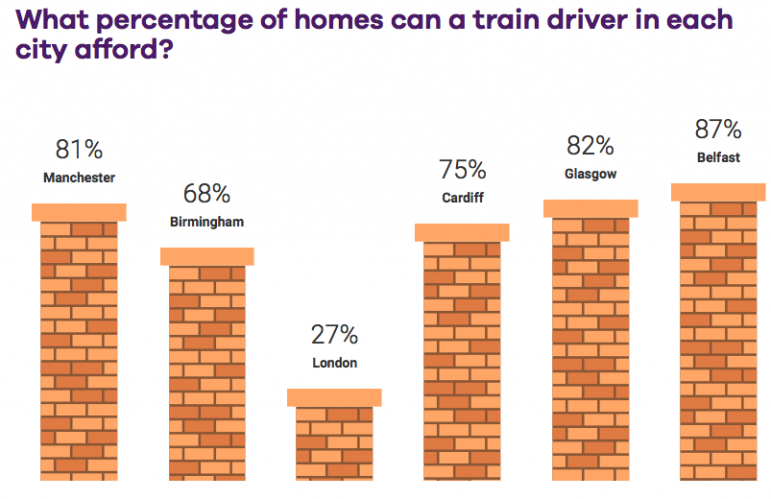