A disenchanted customer of Purplebricks has used social media to complain about the firm and ask for help from a variety of sources, including her MP, the Law Society, Which?, various TV programmes and the presenter Matt Allbright, Citizens Advice, and the Committee for Advertising Practice. EYE was also sent the tweet.

She also sent the same request to Nadine Dorries, Conservative MP for the nearby constituency of mid Bedfordshire.

Mwangi said in the string of tweets that she needed help: “Purplebricks is making my life a misery. They want me to pay a bill of £1,945 for not selling my house.”

She said that in four months there had only been two viewings. She said she had been led to believe that there if there were no sale, there would be no fee – a claim totally refuted by Purplebricks.

Shuker replied: “Hi Carol. Sorry to hear this. If the company can’t be of assistance, and I see they’re in touch with you, please email me on gavin.shuer.mp@parliament.uk with your details and I can see if I can do anything to help.”

Purplebricks customer services has responded in the thread more than once, offering its help, which appears to have been declined.

A spokesperson for Purplebricks said yesterday: “Mrs Mwangi contacted us as she had been asked to pay her fee.

“She explained that she was informed that she would not need to pay if her property did not sell.

“On investigating the case, we can see that Mrs Mwangi confirmed that she had read, understood and agreed to our terms and conditions. She also received a follow up email which again reiterated our payment terms.

“We always ensure that we are clear with our payments terms and our model.” 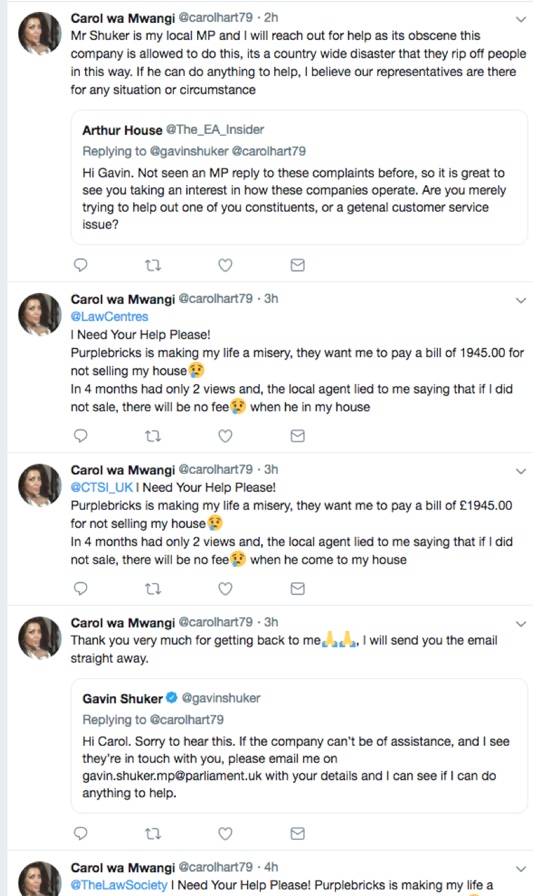