Purplebricks has warned shareholders that it is in discussion with HMRC over its anti-money laundering procedures, and that there could be a potential cost.

A statement on page 79 of Purplebricks’ latest annual report discloses a “contingent liability”.

It says that during an AML compliance check, “a number of findings were noted in relation to non compliance with certain aspects of this legislation”.

The statement continues: “At the balance sheet date and the date of this annual report the company is unable to reliably estimate the financial impact of these findings and related ongoing discussions.”

The statement says that Purplebricks is not involved in any legal, arbitration or governmental discussions, including the one cited with HMRC, which could have had a material effect on the business’s financial position.

In the annual report, Purplebricks also warns of a possible risk of litigation, but this is in the context of the number of changes it has recently undergone in terms of leadership, structure and geographic footprint.

In March this year it was announced that Countrywide were fined £215,000 by HMRC for failing to ensure that its AML procedures and record-keeping were in line with regulations.

Countrywide said it has improved its anti-money laundering controls.

HMRC also made 50 surprise visits to estate agents in one week as part of a crackdown.

HMRC said it would now take action against businesses that failed to comply, although it did not name any of them.

Of the agents visited, 35 were in London, five in Leicester, four in Buckinghamshire and Berkshire combined, three in Greater Manchester and one each in Watford, Wakefield and Wolverhampton.

Last week, HMRC fined currency company Touma Foreign Exchange a record £7.8m, not because of any actual money-laundering but breaches including risk assessments, record keeping, due diligence and staff training.

Separately, writing on Forbes, property portals analyst Mike DelPrete has said that Purplebricks’ “impressive growth in the UK market continues” but points to a drop in revenue in the softer market: 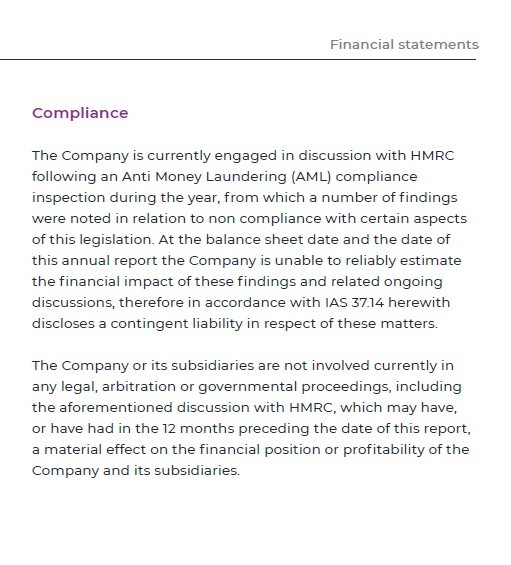