More than half of properties in expensive areas of London were withdrawn during the second quarter of 2017.

Data from LonRes shows half of properties in prime central London – which includes central boroughs of Westminster, and Kensington & Chelsea, as well as Docklands – and almost 60% in surrounding areas were withdrawn.

LonRes attributes this to vendors’ unwillingness to cut prices.

A report from the data company says the number of withdrawals regularly increases when the market is affected by changes such as by Stamp Duty.

The rate of withdrawals hit a high of 62% last year amid the introduction of the additional Stamp Duty rate, and only 38% of properties in the most upmarket areas were sold rather than withdrawn during the second quarter of 2016.

LonRes was more positive about the most recent quarter, stating: “In the second quarter, half of properties removed from the market had found a buyer, compared with just 38% over the same three months last year.

“This, coupled with more encouraging transaction figures emerging from prime central London, could signal a rise in sales activity for the remainder of the year.”

The LonRes comment of course neglects to mention that if 50% of properties sold rather than getting withdrawn, another half also were taken off rather than completed on, as the graph below shows. 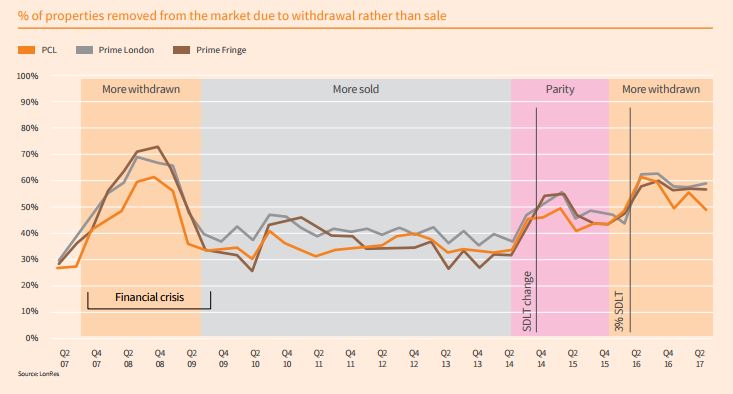 Its quarterly residential review showed transactions in the small PCL marketplace were up 3% year-on-year, but sales in prime London – generally less central north and western parts of the capital – and prime fringe – the south east and west of London – were down 12% and 16% respectively.

For anyone outside London or baffled by the prime terms, the table below shows the postcodes considered prime central, such as Kensington; prime London, such as London Bridge; and prime fringe such as Marylebone and Hampstead.