The new UK Cities House Price Index is from Hometrack, which has binned its old one, which took reports from agents in each postcode.

Whereas the old Hometrack index gave you something of a national picture, the new one is all about “granular” local housing markets.

In principle, information on local markets is a great idea and we’re all for it. We’re not too sure what granular means.

For its new survey, Hometrack has picked 20 cities – which immediately makes it of no interest or relevance to someone like Eye, whose nearest city on the list is 40 miles in one direction (London) and 40 in the other (Southampton).

And if you live in Wales, you’d feel seriously aggrieved. Only Cardiff gets on the list, but it can’t be very relevant for those living anywhere in the rest of the principality.

However, for those agents, buyers and sellers in the 20 cities that are mentioned, it must presumably be an improvement on the old Hometrack offering.

And what are the findings? According to Hometrack, average house prices in London and Cambridge have risen by over three times the national average in the last 12 months.

Eight cities have house prices which are now above their 2007 peak with Cambridge leading the way with a 32.5% increase, next to London at 29%.

London has driven the recovery in house prices over the last year, but the monthly rate of growth slipped to just 0.4% in September compared with 1.0% at its peak in April, reflecting weaker demand.

Hometrack also compared the average rate of growth over three and 12 months to determine if the underlying rate was accelerating or decelerating. Liverpool and Glasgow outpaced the rest of the UK, albeit from a low base.

In contrast, Oxford and London registered growth deceleration pointing to a slowdown in price growth.

Is this what matters to you? We would be interested in your views.

This is what Hometrack says about its new index: “The new Hometrack UK Cities House Price index has been designed to provide a granular analysis of housing market trends at a city level – cities are the focus for economic and demographic change as well as a focus for greater cross-area collaboration.

“The 20 cities in this new house price index cover a land area that is less than 5% of the UK but the cities contain over 40% of the value of UK housing and a similar proportion of all UK jobs.” 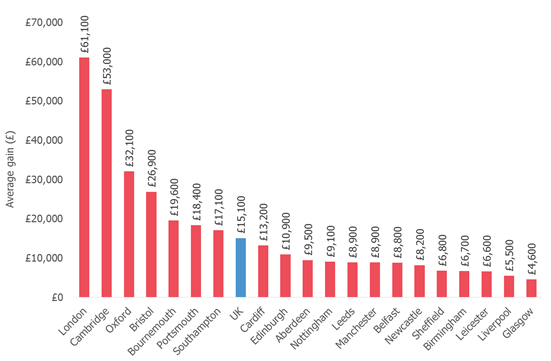 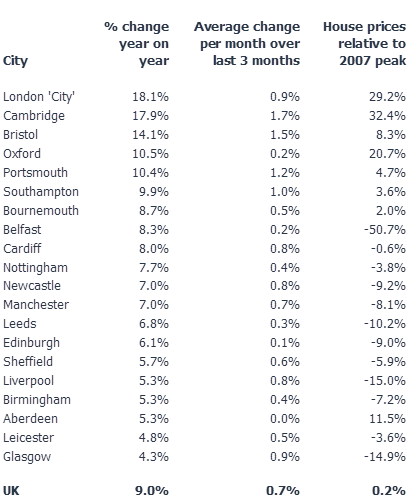