The Royal Institution of Chartered Surveyors (RICS) has published a new Guidance Note for surveyors that has abolished the ‘seven-metre rule’ valuers use when determining whether Japanese knotweed poses a threat to a property.

The industry body has issued a 36-page guidance note that “reflects an improved understanding” of the fast-growing weed, which can sometimes make a mortgage application or selling a property more difficult.

The move comes following a 2019 report by the House of Commons Science and Technology Committee where MPs said mortgage lenders’ approach to Japanese knotweed is “over cautious”.

RICS’ new guidance states: “The so-called ‘seven-metre rule’ focused more on what has been demonstrated to be an overstated risk of Japanese knotweed to buildings, rather than its sometimes-serious impact on amenity.”

“Research has demonstrated, and it is now generally accepted, that Japanese knotweed poses little or no risk of structural damage to robust buildings with substantial foundations such as dwellings, as opposed to less sturdy structures with shallow foundations, such as conservatories, garages or boundary walls,” it adds.

The industry body continues: “There is also a recognition that the most appropriate objective when Japanese knotweed is encountered is to ensure an appropriate level of control rather than to automatically strive for eradication. 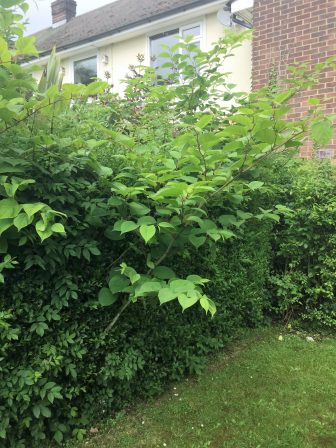 “In some circumstances, for example when construction is proposed, proper control may involve physical removal but in many domestic situations effective control can be achieved by the managed application of herbicides.

“As part of normalising expectations in relation to Japanese knotweed, the assessment directs the valuer or surveyor to outcomes related to the management of Japanese knotweed rather than emphasising risk to buildings.”

He commented: “The new Guidance Note is cautious and sensible, recognising the very real risk Japanese knotweed poses to homeowners and lenders, and giving greater clarity to surveyors.

“The blunt ‘seven-metre rule’ has rightly been scrapped in favour of a more nuanced approach that allows surveyors to use their own professional judgement in determining the potential impact of Japanese knotweed. I’m pleased to see the focus is no longer only on the structure of the property and the risk of damage, which is rare, but also on amenity value – in other words, the effect of knotweed on the use and enjoyment of the garden.

“Equally importantly, it also recognises the problems that can result from encroachment of knotweed from adjoining land, requiring surveyors to flag infestations within 3 metres of the boundary on neighbouring properties.

“If there’s any criticism, it would be that the Guidance Note suggests control of knotweed may be a more appropriate goal than eradication. While herbicide treatment can be an effective approach in certain cases, there are often very good reasons to make eradication the goal – and by settling for ‘control’ the bar is lowered for the sake of a lower initial cost. Herbicide treatment is particularly inappropriate where the plant’s location could impact neighbouring properties and be subject to potential legal claims, or on more valuable properties where the diminution of value justifies the higher cost of removal.”