Central and local government as well as the Mayor of London have all come under attack for the level of empty commercial properties in the capital amid the housing crisis.

Research by Live-in Guardians, which arranges for people to occupy empty properties at a reduced market rate to help keep them secure, found that the number of vacant commercial properties in central London and around the outskirts has reached more than 10,000.

The data, based on Freedom of Information requests to 22 local authorities in London zones 1-3, shows 10,666 commercial properties lying empty.

Arthur Duke, founder of Live-in Guardians, warned this figure could be higher as many councils are unable to record the data.

He lambasted the Ministry of Housing, Communities and Local Government, the Mayor of London and councils for not doing enough while there is a housing crisis in the capital.

The worst areas were the City of London with 3,409 empty buildings, Hammersmith & Fulham with 1,288 and Ealing with 1,147 vacant commercial properties.

Kensington & Chelsea, and Newham Councils did not respond to the request.

Duke said: “This is a reflection of extortionate property prices coupled with ferociously high business rates that push companies further away from the centre of town to the suburbs.

“Many of the buildings from our research include office buildings, retail premises, police stations, warehouses and factory buildings. We also have former law courts, restaurants, a former go-karting track and even a few banks.

“More should be done to make use of these empty spaces, which are, in fact viable temporary homes with a little imagination and effort – that benefit all parties.

“The Government should see these empty buildings as an alternative temporary form of living and has the added bonus of helping guardians save money they could potentially use to buy their own property in the future. Once guardians are living in commercial spaces, the owners are typically exempt from paying business rates and there’s no requirement for expensive security costs.” 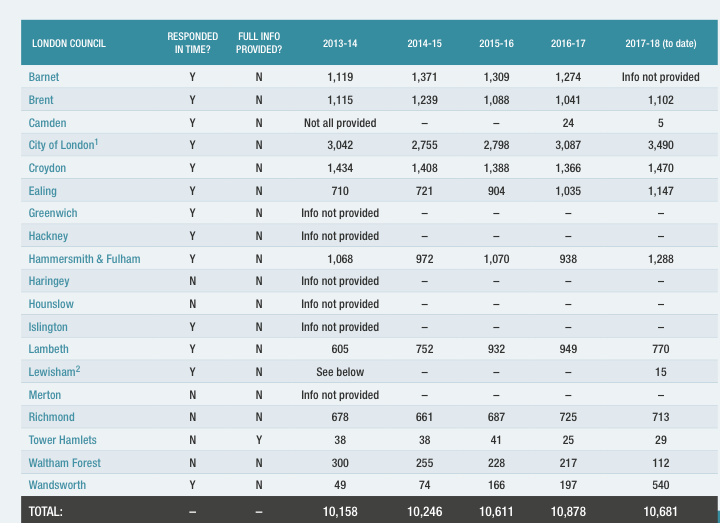